Regular season baseball at The Ballpark in Arlington comes to an end as the Rangers play their final home series of the season against the Anaheim Angels. Will the Rangers play past game 162? It will all be decided this weekend

Let's face it, there was plenty of Your Texas without very much of Your Rangers this season. That might sound joyless, and I'm sorry Ron Washington, but while the Rangers have remained in the hunt for a playoff spot all season in 2013, they've been a hard team to love.

Where once there was "NAP O LI" reverberating through The Ballpark, we've heard the sound of balls careening off the backstop because A.J. Pierzynski had to reach to catch something. Where once we had Josh Hamilton carrying the team from the No. 3 spot in the lineup with legendary displays of talent, we've had Lance Berkman covertly ruining the Rangers from the inside instead of mouth off about them from his rocking chair in Houston. Where once we had Cliff Lee show us what it's like to have a real ace, a true difference-maker from the top of the rotation, we've had Matt Garza embarrass us via social media, and on the mound, while Yu Darvish gets the Tony Romo treatment from the local wags.

It's true that I've been quite sour of late - as the Rangers have gone from leading contender to scrambling for the final spot in Bud Selig's Excitement Zone in just a matter of weeks - nevertheless, this might be the last time to say anything nice in this spot about this team. Therefore, I will try my best to say something good about every person whom wore TEXAS across their chest even once this season.

Here's a breakdown of the pitching match-ups against an Angel team guaranteed to sit at home in October for the fourth straight season:

Advantage: Matt Garza nearly tossed a shutout last time out. I see now why the Rangers threw Neil Ramirez in that deal.

The Rangers have a history of alternating between pummeling Jerome Williams and getting flummoxed by him. It's anyone's guess which is more likely.

Advantage: C.J. Wilson has weighed in on the Rangers' Sept. struggles. Everyone can stop writing and talking about it now. Ceej has it covered. But while we may be annoyed that C.J. is doing his best local writer parody, it should be noted that he's probably been the best non-Trout player on the Angels this season.

I think I saw that Garrett Richards cut his hair. Now I won't be too mad every time I see him because I instantly think of Jered Weaver.

Advantage: If this is to be the final time we see Yu Darvish pitch in 2013, the least he can do is go out with a perfect game, right?

If this is to be the final time we see Jason Vargas pitch in 2013, the least he can do is go out and not look so miserable the whole time, right? 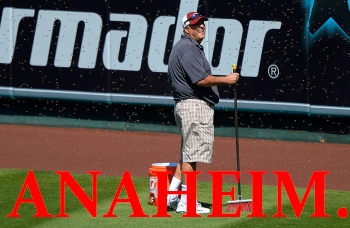