The last time the Rangers forgot how to win baseball games, the Angels came to Arlington and the Rangers hit walk-off home runs on three consecutive nights to propel the team to a 20-7 August. Before that series with the Angels began, the Rangers trailed the A's in the West by six games. Before August concluded, the Rangers held a lead over the A's by as much as 3.5 games.

Now that lead is back down to a half game and the Rangers are coming off consecutive series losses to the Twins and A's. That is to say, the Rangers could really use another Angel pick-me-up.

A part of why the Rangers were so successful against the Angels last month is they were able to run wild on the bases. In the six games the Rangers played the Angels in late July/early August, the Rangers stole 17 bases. That's an average of nearly three stolen bags per game. Leonys Martin had back-to-back three stole base games on August 6 and August 7. Elvis Andrus stole five bases in those final two games the last time these two teams played.

The Rangers won't face Tommy Hanson in this series, whom they robbed five bases off of, but they will face Garrett Richards on Saturday and they stole three bases off of him the last time they met. However, eight of the Rangers 17 stolen bases against the Angels, over that six game stretch, came against Angel relief pitchers.

Here's a breakdown of the pitching match-ups against baseball's biggest disappointment to everyone but Ranger fans:

Advantage: I'd like to believe, since C.J. Wilson is having a very good year along with the likes of Chris Sale, Bartolo Colon, and Felix Hernandez, that the Rangers will pummel him and we'll laugh like Liam Hendriks never happened. I mean, after all, the only other time the Rangers have faced Wilson this season, he allowed six earned runs in only four innings for the only time he's allowed more than three runs since July began. I'd like to believe that the Rangers have Ceej's number.

Advantage: Derek Holland has suddenly run into base on balls issues. In every start over the last month, he's allowed three or more walks which culminated in allowing five walks to the A's on Monday. This drew the ire of Ron Washington who once again went out to undress Holland on the mound. Hopefully Holland takes the mound on Saturday a little pissed off but a little more in control.

Advantage: Jason Vargas probably has the advantage over Nick Tepesch simply because Nick Tepesch hasn't started a game since early July and/or Travis Blackley because Travis Blackley shouldn't have started a game since ever. When you think average American League pitcher, think Jason Vargas. If you looked up average American League pitcher in the dictionary, there'd be a picture of Jason Vargas. But don't look at the picture of Jason Vargas because he looks like a ghoul that died during a sewer cave in while getting a text message that his wife was cheating on him. 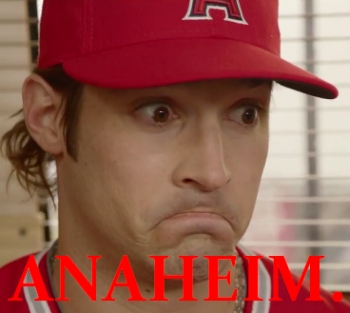 SB Nation Angels Blog: Halos Heaven (Only for the lulz)