Who Is The Current "Face" of the Texas Ranger Franchise?

Or: The Curse of Michael Young

Share All sharing options for: Who Is The Current "Face" of the Texas Ranger Franchise?

The Rangers don't have a particularly long history, and they certainly don't have an illustrious one, but they've had several recognizable figures whom were easy to identify the team with on a national scale.

When the Rangers came to Texas, all-time great Ted Williams was the manager. Future President of these United States George W. Bush once owned the team. Juan Gonzalez was once in a commercial for Reebok and won a couple MVP awards because he scared the pants off of pitchers in the '90s. Alex Rodriguez was here for only a few years but his contract -- and Mike Trout-as-a-SS production -- were as polarizing as they were memorable. Josh Hamilton is a larger-than-life personality/story who was the franchise player for the best teams in Ranger history while also being among the most gifted players in the game.

The Rangers have been blessed with easily-recognizable-as-Texas Rangers talent throughout the history of the franchise. Think about it. When you think of the Milwaukee Brewers historically, who do you think of? Robin Yount and Paul Molitor, right? (But for real, the answer is Bernie Brewer or the Sausage Race's Brett Wurst.) Big deal. We had a guy just like them, too. His name was Michael Young and he's where "Face of the Franchise" came from.

When I think "Face of the Franchise," I think of one of two things, either "player ESPN would use on the little overlay advertising Sunday Night Baseball for a particular team" or "person who personifies the franchise to a degree that he transcends the current players."

For example, many folks have considered Nolan Ryan to be the face of the Texas Rangers for like last 20 some odd years now. Many probably still do and always will. For another example, when I think of the Baltimore Orioles, I think of Cal Ripken Jr. and I probably always will. (Though it is amazing to me that the 2014 answer to this question for the O's is Chris Davis.)

MLB Network is doing a thing where they're having folks on Twitter vote for the Face of the Franchise for each of MLB's 30 teams. The world of Twitter has spoken and Adrian Beltre was elected the current Face of the Texas Rangers.

The fans have voted 3B Adrian Beltre the Face of the @Rangers! #MLBNHotStove pic.twitter.com/6mo7vdpkPL

I think Adrian Beltre a very defensible choice. Beltre is (likely) a future Hall of Famer. He's been the Rangers' best player over the last three years. He's landed himself near the very top on my list of favorite Rangers ever (And he should be there for you, too). And he's an all-time great third baseman. It's a good choice. I can totally envision ESPN putting Beltre front and center on their promotional packages.

That said, I think you could also make a valid argument for Elvis Andrus. First of all, I don't think "Face of the Franchise" has to mean best player on the team. And while I think Beltre is the best position player on the Rangers right now, I also think that this is Elvis' team.

Elvis came up right as the team became a contender, has played on two World Series teams, and he signed a long term extension because he wants to be here. The Rangers traded Ian Kinsler essentially because of the presence of Elvis Andrus. He's is still young, marketable, affable, and by golly ... that smile. Elvis is becoming what he always sought out to be. He's becoming the Derek Jeter of the Texas Rangers (Not with the bat, obviously.). He's the franchise SS. He's the Captain.

I also think you could select Yu Darvish and not be wrong. There's never been a more heralded phenom to come out of Japan than Darvish and he's excelled at every turn in Texas. He's far and away the most recognizable Ranger globally and probably the most interesting player overall when looking through the lens as a baseball fan, not just a Ranger fan.

Darvish finished second in the Cy Young balloting his second year in the league and collected the most strikeouts by a pitcher in the American League (277) since Pedro Martinez in 2000 (284). He is outstanding. He'd get my vote for likely best overall player on the team in 2014. He's well on his way to being the best starting pitcher in franchise history. It honestly wouldn't surprise me if he's the best pitcher in all of baseball soon. He's the definition of a baseball star.

A darkhorse choice, and maybe the smartest option of all, is Jon Daniels. Not only is Daniels revered as one of the best GMs in baseball, he's been tasked with nearly completely remaking the Ranger roster while being counted on to keep the team competitive and the revenue flowing. This follows a run where he built the teams that saw the Rangers make World Series in consecutive years. Before 2010, the Rangers in the World Series was one of sports more improbable thoughts.

After a September collapse in 2012, and the frustrating team that followed in 2013, the Rangers are still considered a top contender in the American League heading into the 2014 season. All of the players listed above were acquired by Daniels and Ron Washington was hired by him. If there is one person most responsible for this era of Texas Rangers baseball, it's Jon Daniels.

It's possible a Shin-Soo Choo or Prince Fielder will hit and charm their way to the front of our collective consciousnesses, as well. (In fact, Prince is a prime candidate to be the most recognizable Ranger in the national media. He's got that Josh Hamilton star power.)

In the future we may see a Jorge Alfaro or Jurickson Profar pictured on the front of the pocket schedule or on the billboards. But, at least for now, baseball fans have pegged Adrian Beltre as the face of the Texas Rangers.

P.S. As a reward for reading and voting, here is your collector's copy of the first issue of Ranger Beat: 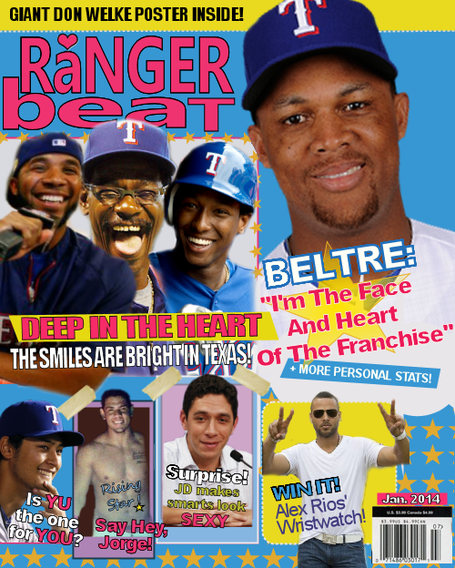