If you hold a Nolan Ryan Beef Dollar Hot Dog Night and Nolan Ryan doesn't show up, does anyone get to eat cheap wieners?

Share All sharing options for: The 2014 Texas Rangers Promotional Schedule

Used to be, when I was a kid, there were three days that I looked forward to most: Pitchers and Catchers, the day the Sporting News baseball preview magazine hit newsstands, and the day the Rangers sent me a new pocket schedule in the mail.

That final day was especially fun because I would hurriedly read off the list of promotional giveaways for the upcoming year so I could know which dates to pester my mom about in hopes that she'd drive me to Arlington to see the Rangers play. Somehow, every summer, it worked. We only got to go to a few games per season, though, so I had to make sure I got something rad.

In the Arlington Stadium days, bat night was a must. Anything Pudge or Nolan Ryan related immediately shot to the top of the list. Sometimes I would covertly compromise with my mom and pretend to be really excited about a Rafael Palmeiro t-shirt or something so I could maybe squeeze in an extra game. I knew Raffy was her favorite player.

It wasn't until much later in life that I found it that my mom wasn't a fan of his stellar defense at prolific hitting at first base. No, apparently, back in his day, Raffy was extremely popular with moms for different reasons.

I noticed the other day that the Rangers have released their promotional schedule on the website. It made me feel like a curmudgeonly old man because the first thing I did was check for the date of Bark in the Park and if there was going to be another fedora giveaway so I'd know which dates to avoid.

The good news is, there doesn't appear to be any dog days at The Ballpark The Globe (at least not until August -- Hiyoooo!) but the bad news is, the fedora is indeed back for another year. 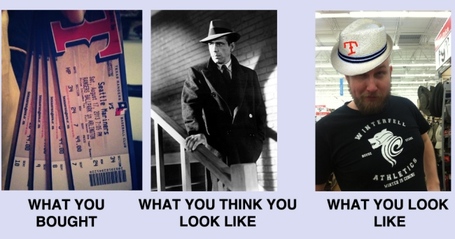 Chuck, I know you're probably reading this. We've gotta think of a different hat. The fedora giveaway is the grotesque offspring of the bucket hat of the '90s. It's just not an attractive hat on anyone who was born after the 1930s or Indiana Jones. Harrison Ford is a pretty cool guy, but I doubt he's coming to fedora night. 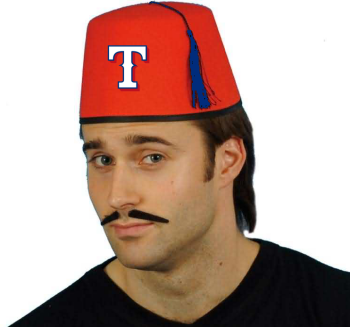 Put a little blue tassel on there. Maybe even secretly pretend it's Doctor Who night. At the very least, could we get a Rangers cloche hat for the ladies?

Here are some of the highlights from the 2014 Promotional Schedule:

As always, on Opening Day, you can get a schedule to hang on your fridge. Of course, only if you're 21 or older. Drink magnets responsible, folks. 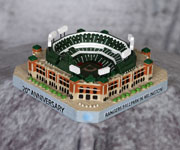 This is pretty neat. No word on if they're going to put this inside a snow globe in honor of our new sponsor. (But they should.)

Do they just have MercyMe chained up in that secret Ballpark apartment to bring out for post-game concerts every summer? I bet it was poor Herbie's job to feed and water them. 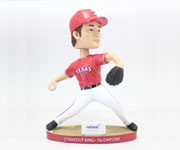 It's times like Bobblehead unveiling season when you begin to miss your players' wilder haircuts. This Yubblehead just isn't the same without the MacGyver mullett Yu was rocking in his rookie season. This is the second straight year that the Rangers have had a Yu Bobblehead. It will be the third date in just over 12 months that a Yu Bobblehead is given away. Even if the local newspapers refuse to, the marketing department appreciates Yu.

Shin-Soo Choo is getting a t-shirt day in April. Prince Fielder is getting a Bobblehead. I think we know the hierarchy of newly acquired Rangers now. I'm super excited for this bobblehead, though. Prince is another guy that recently went modest with his hair. If Prince hadn't gone with the new close-crop haircut, I'd be wishing for real human hair dreads. 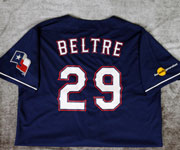 Beltre gets the coveted "Smile Generation" sponsor. Does this mean he's leapfrogged Elvis in the smile standings?

I don't know what this means but that's right in the middle of tornado season which seems like tempting fate. 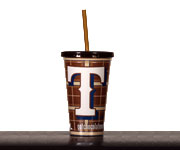 I'm not sure I know what a milk glass is. Is it just a glass that you drink milk out of? These aren't actually made of glass right? If so, could we see a modern day reenactment of 10-cent Beer Night? After all, the Rangers are playing the Cleveland Indians on June 8. Picture kids spazzing out on chocolate milk with projectiles at the ready. It could get ugly. Also, a milk giveaway in June? I think some folks are going to be experiencing their own "Milk was a bad choice" moment.

I get the feeling that there's like 200 boxes of these in Chuck Morgan's office. Jeez, guys. Just take a bag already. 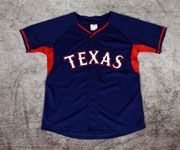 This is an historic item not only because it will be the first giveaway sponsored by our new Globe Life And Accident Insurance Company overlords, but also because you can simulate hiding your pit stains just like your favorite Major League shortstop. 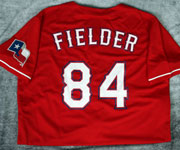 You suddenly remembered that Prince Fielder is going to be wearing #84. You've come to an understanding that it will never not be weird.

This is a must have. If there's any magic in this world, it'll have a voice chip in it that plays the call of Neftali Feliz striking out A-Rod whenever you bobble it. 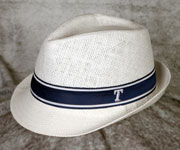 July 27 has opened up on my calendar, at least.

This is another must have. There's no photo of it yet but I like to imagine that it will have a bobble fist-pump. 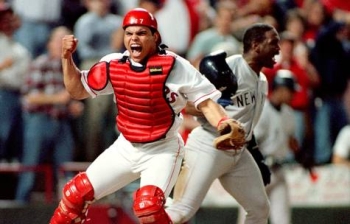 Jackie Moore: "You got it."

Jackie Moore: "Thank you. You have a nice day now."

Mail Carrier: "You too."

So, there you go. I'm mildly disappointed that we're not getting a Giant Don Welke Poster Day. There are more promotions and giveaways than just the ones above, however. I've only noted some of the highlights. Have a look for yourself to see what interests you. What interests me is, over 20 years since I first marked off Pudge or Nolan giveaways as target dates in my pocket schedule, there are still Pudge and Nolan giveaways at The Ballpark in 2014.

Now if we could just get real wooden bats and aluminum bleachers again.

Next Up In MLB