In a game that was reminiscent of a couple of classic baseball calamities of recent Ranger past, and one soaking in Cactus League shenanigans, Ranger outfield prospect Nick Williams obviously took offense to his #7 ranking in the Lone Star Ball Community Prospect list and made his big league spring training debut a memorable one.

After Colby Lewis and Nick Tepesch combined to allow 13 A's runs in a combined 4 1/3 innings of work, the Rangers trailed 13-6 heading into the 6th inning. Another big game from Michael Choice --  2-for-3 with a home run against the team that traded him -- helped the Ranger climb back to 13-11 when Williams made his Cactus League debut in the 7th. Then this happened:


Sure, it was probably Arizona-aided a little. But Williams showed his developing power by squaring up enough to drive the ball over the fence 410 ft. Catcher J.P. Arencibia was so surprised, Williams almost met him at second base on the blast as they rounded the bases. I'm guessing Arencibia knows a little more of what Williams is capable of now.

The Rangers tacked on two more runs in that inning to take a 14-13 lead only to give the lead back to Oakland one half inning later. Oakland, made it to the 9th up 15-14 when Williams stepped to the plate for his second at-bat. And then this happened:

Nothing wind-aided about a smoked line drive. Down and in is the happy zone for most left-handed hitters, but what was impressive to me is Williams was able to hit a rope on a ball shin-high. 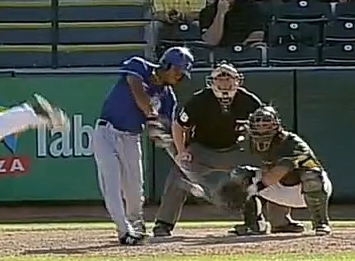 Usually, those are the types of balls you see batter golf into the air. Williams was able to square up. He's a hitter, folks. Another impressive aspect of his second home run was his ability to work the count full and wait for a pitch he felt he could drive. For Williams, one of the things to watch this season is if he'll be able to cut down on the strikeouts and work the count more. Williams loves to hack because he's good at hitting baseballs.

Williams' second dong tied the game and the Rangers added another to finish off a wild 16-15 win over the Oakland A's. But, as Evan Grant and T.R. Sullivan note, Williams was the story.

Williams will likely start the year in Hickory but he has a chance to start in high-A Myrtle Beach depending on what the Rangers want to do with their young contingent of developing sluggers. For more on Williams, here's the scouting report that AJM did on him last month. Also, here's Kate Morrison's profile of Williams as her #4 prospect in the Rangers system.

I'm a Nick Williams fan. It was great to see him come through big in his first taste with the big leaguers. I'm looking forward to following him in 2014 and this did nothing to help my impatience.

So, what did Williams have to say for himself after the game?