The number one source for all your lost velocity concerns

You folks ready for Russell Wilson Day? Well, ready or not, here he comes: 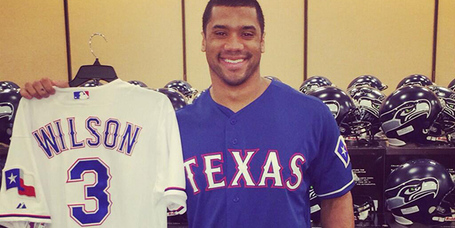 As far as yesterday went, Richard Durrett reacts to the Rangers' 9-7 loss to the Chicago White Sox and Robbie Ross' attempt to make the jump from the 'pen to the rotation.

Evan Grant has more on Ross and Tanner Scheppers hoping yesterday was just the beginning of their transition to the rotation.

Over at MLB.com, A.J. Cassavell notes that Ross was pleased with his first Cactus League outing as he battles for a spot in a tenuous rotation.

Grant writes about Nick Tepesch, another home-grown pitcher eyeing the rotation, looking to make a good first impression with his changeup today in his first outing of the spring.

Drew Davison writes that the Rangers are excited to get a full season with Alex Rios after he came in and played well in the second half last season.

As AJM wrote last night, there is concern about Neftali Feliz's fastball velocity. But, according to Durrett, don't count Feliz among those who are concerned.

EG writes more on Feliz's early Colby Lewis-esque fastball rather than the Aroldis Chapman-esque fastball we saw in his first few years in the league.

Speaking of Wilson, Cassavell borrows T.R. Sullivan's Notebook to write about Russell Wilson Day in Surprise, Feliz's rocky outing, Shin-Soo Choo coming down with a case of "Spring Training arm," and other notes.

Stevenson profiles Ranger winter trade acquisition Miles Mikolas -- who once ate a live lizard -- on his love of Tom Selleck and '70s-style mustaches. He sounds like a Jason Parks kind of guy.

WFAA.com's Kate Morrison has Jorge Alfaro at No. 6 on the top prospect watch list.

Lastly, Gil LeBreton writes 14 observations about his fourteen days in Surprise with the Rangers.