Series Preview: Philadelphia Phillies @ Texas Rangers - It's a Hard Globe Life For Us

'Steada titles, we get tricked! 'Steada health, we get nicked!

Share All sharing options for: Series Preview: Philadelphia Phillies @ Texas Rangers - It's a Hard Globe Life For Us

Now it's survival mode for the April Texas Rangers. And for us fans, we're left wondering if Donnie Murphy is enough to bridge the team back to Profar or if Robinson Chirinos is a legitimate big league backstop option. We can only cross our fingers that the likes of Yu Darvish, Matt Harrison, and Colby Lewis actually return from injury when the Rangers are telling us they'll return. Because as of right now, we're about to see two guys who were supposed to comprise a large part of the back of the bullpen try to keep the rotation together long enough for the cavalry to arrive.

Where once the bullpen looked like a set-in-stone strength, it's now occupied with three guys the Rangers picked up off waivers over the off-season -- one of whom is a Rule 5 draftee, and Neftali Feliz, the presumed closer, couldn't even win a spot. You'd have had a better chance of winning a billion dollars from Warren Buffett for your perfect March Madness bracket than guessing a Ranger Opening Day roster with Seth Rosin, Shawn Tolleson, and Pedro Figueroa on it.

The fifth starter, Nick Martinez, was ranked as the 15th best prospect in the system by we LSBallers and had already literally packed his bags for Double-A Frisco (where he made all of four starts to end last season) when he found out he'd be pitching for the Rangers in April.

How bad did things get in the last week? Chris Gimenez is on the Opening Day 25-man roster simply because the Rangers were so desperate for catcher depth that they claimed Gimenez too late to outright him and now have to leave him on the roster for at least one day into the regular season.

Yes, spring training wasn't kind to the Rangers. But man, it did wonders for suppressing expectations!

It's not all bad, however. I can tell you why in three simple words: Lance. Berkman. Retired. The 2013 Rangers are not the 2014 Rangers and that's a blessing even if new utility infielder Josh Wilson will be making more starts for the Rangers than is otherwise reasonable.

Here is your official 2014 Texas Rangers Opening Day 25-Man Roster and my thoughts on them:

Jim Adduci - Wash wants him to be the new Craig Gentry but doesn't realize that he's the new David Murphy.

J.P. Arencibia - He's going to hit several walk-off home runs and become a fan favorite with an OBP of .250.

Adrian Beltre - Still the #1 reason to watch the Texas Rangers.

Leonys Martin - Every time a player runs on Leonys, a human trafficker gets arrested.

Donnie Murphy - We will never be free of D. Murphy.

Josh Wilson - I used to make fun of the Mariners for employing Josh Wilson.

Martin Perez - He's the ancient veteran of this group.

Robbie Ross Jr. - Let's all hope that adding Jr. to his name isn't like Joe Ortiz demanding to be called Joseph Ortiz.

Joe Saunders - The God of our dark timeline wears a Saunders shirsey.

Tanner Scheppers - I'm legitimately excited to see what he can do as a starter even if I'm terrified for his arm.

Alexi Ogando - As busted up as the rotation is, the bullpen is where Ogando needs to be.

Jason Frasor - Bizarrely sky-rocketing up my list of favorite Rangers.

Joakim Soria - I'd take him being half as good as Joe Nathan was coming back from TJS to become closer.

Shawn Tolleson - I hope he took Clayton Kershaw off his Christmas card list.

Here's a breakdown of the pitching match-ups against the team that had better traffic than we did:

Advantage: Yu Darvish vs. Cliff Lee was going to be so special. Now it is special simply because it's Opening Day. Please be nice to Tanner, Cliff. He's a good kid.

At least A.J. Burnett will get to see firsthand just how horribly the Rangers treat the family members of players and why he should be glad he avoided signing here. On a similar note, at least Kristen Lee will have to wait in traffic leaving the game tomorrow.

Advantage: Because National League baseball is super lame, the only thing I really know about Kyle Kendrick is that time he was pranked by the Phillies and thought he had been traded to Japan. That happened several years ago. Like, Milton Bradley was a Ranger when that went down. I should learn more things about Kyle Kendrick, probably.

As for Robbie - You've come a long way, kiddo: 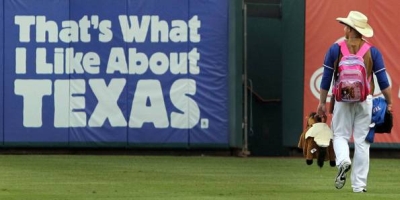 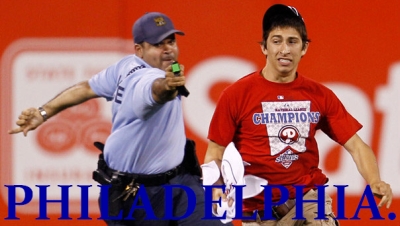 Rangers' 2013 Record vs. Phillies: These teams haven't played since 2011 (I think the last time the Phillies played in Arlington, Eric Hurley was in the rotation.)