Could Elvis Andrus have made a play on David Ortiz's single?

Some Ranger fans suggested after the game last night that Elvis Andrus could have made a play on David Ortiz's single that broke up the no-hitter. Is that true?

Share All sharing options for: Could Elvis Andrus have made a play on David Ortiz's single?

Last night, Yu Darvish's no hitter was broken up by a two out ninth inning single by David Ortiz, in the teeth of the shift.  After the game, some have suggested that Elvis Andrus could have made a play on the ball if he had just dove for it, and might have preserved the no hitter.

Is that a legitimate complaint?

Here's the video of the play, from MLB.com:

In live action, its hard to say...maybe he could have gotten to it, maybe not.

But let's look at a screen cap, as the ball was going past Elvis: 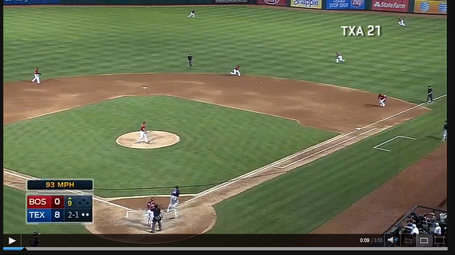 Okay, that's not the easiest thing to see...let's zoom in... 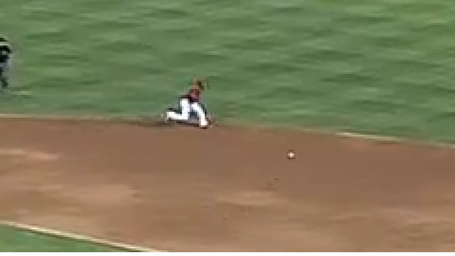 Okay, this isn't the best resolution, but it looks like the ball is more than a body length away from Elvis at this point.  Could Elvis have dove for the ball there?  Sure.  Would he have reached it before it went past him?  Probably not.  He would have had to have started his dive earlier than this, and if he had, he wouldn't have been able to reach far enough to get to the ball.

Odor, of course, did dive for the ball, and came up short.  The reality is that, given how the players were positioned, it didn't matter if anyone dove or not...it was just a well placed ball that went for it a hit.

That said, you may feel differently, so there's a poll below you can cast your vote on...