Boo-yah! We're going to the world series of injuries!

Adam and I went to the game last night.  The seats were very good.  And that's all I have to say about that.

You want some injuires?  I got your injuries.

Matt Harrison left the game with back stiffness.  Because of course he did. 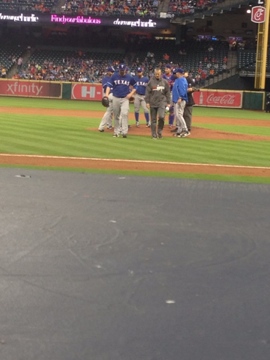 Have you been tithing?  Maybe you should start tithing.  Evan Grant says the pitching staff is in a delicate spot, which is such an understatement that it borders on euphemism.  One of the nice things you can say about the horrible teams of the early 00's is that at least when someone was injured it was just someone awful.

Speaking of awful, Alex Rios had an awful night Monday so his teammates responded by making a joke.  Evan Grant points out that strikeouts are not a joking matter, unless it involves Josh Hamilton.

T.R. Sullivan says that we got four starts out of Harrison and maybe in a year and a half we'll get four more.

Was last night enough misery for you?  How about if Scooter Feldman drinks your milkshake?

T.R. Sullivan's notes column covers Harrison leaving the game and Nick Tepesch being ready to step up to the big club and promptly get injured.

A Ranger catcher is good at something, not hitting of course but hey, it's something.

Rougned Odor is not intimidated by the big leagues.

Finally, dogs (who have been humaity's faithful friends for 40,000 years and would never betray us like Matt Harrison's back) not only follow the human gaze but recognize that humans might be looking at something they can't see.