Even though today's game starts early again, I wanted to put a little something together. Here's a quick series preview:

Recent years, a .500 record nearing June would have been considered a pretty big let down. In 2014, with every possible injury to a bone, joint, or muscle in the human body represented by a Texas Ranger, it's something of a triumph. It's especially encouraging that the Rangers took 3 of 4 from Detroit and the offense has started to click. In an era where it's easier to make the playoffs than ever before, maybe these Rangers aren't dead yet.

It would help, however, if the Rangers could beat the Twins. Last season the Rangers went 3-4 against Minnesota. That included a four-game split at Target Field and a home series loss. Last year the Twins were a stone's throw away from being Astro-bad and the Rangers couldn't handle them. The 2014 Twins -- at a game under .500 coming into this series -- are perhaps more on the Rangers' level this year. Taking this series from the Twins would be a preliminary good start in changing course from that dubious fate.

Here's a breakdown of the pitching match-ups against the land of 10,000 nondescript white guys:

Thoughts: I want to say Big Dick Nick has the advantage but a repeat of this game by Correia would make for the ultimate flaccid Monday.

Thoughts: Getting away from the short porches of New York seems to have done wonders for Phil Hughes. Suddenly this is looking like some hot Ace on Ace action.

Thoughts: This is the complete opposite of whatever hot Ace on Ace action is. This is cold deuce on deuce action. 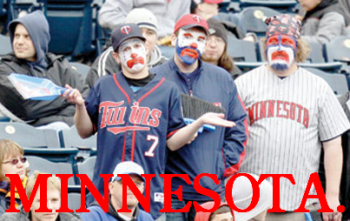 Minnesota's Recent Results: Swept 0-3 by the Giants in San Francisco