Bud Selig is trying to pull a fast one on us but I know a home-and-home when I see one. You have to wake up pretty early in the mid-afternoon to trick me, Bud. And mid-afternoon is when your nap time begins. So this preview will cover the two games the Rangers will play in Denver beginning tonight and tomorrow and the games the Rockies will play in Arlington on Wednesday and Thursday. It's a four game series. You can't convince me otherwise.

To this day you hear about how The Ballpark in Arlington is "The Coors Field of the American League." That simply isn't true. It was likely never true. If it was ever sort of true, now that the jet stream is dead in Arlington, it definitely isn't true anymore. If you look at the park factors for these two parks these days, (which you can do so here) it's night and day. The Ballpark plays almost home run neutral these days whereas folks still go dong crazy at Coors.

A left-handed hitter is more likely to hit a home run at Comerica Park or Tropicana Field than The Ballpark, per example. Right-handed hitters would prefer Fenway, Rogers, Minute Maid, Camden, Yankee Stadium, Target, and The Cell to The Ballpark if they wished to hit a home run in the American League these days. We've reached the dawning of the age of wondering when the Rangers are going to get some hitting up in here.

The Rangers haven't played the Rockies at Coors Field since June of 2006. Back then, the Rangers' starters for that series were John Koronka, Rob Tejeda, and Vicente Padilla. Buck Showalter was still the managing the Rangers and Clint Hurdle was managing the Rockies. Scott Feldman made a couple of appearances out of the bullpen as a side-winding swingman. Lone Star Ball was barely a year old and Mark Teixeira was still the cleanup hitter for Texas. It was dark days back then but at least a Ranger could hit a dinger in his home park.

Here's a breakdown of the pitching match-ups against The Wolves of Wall Street of the West:

Thoughts: Martin Perez had his first bad start of 2014 and man was it a doozy. Where once he had a scoreless streak nearing 30 innings, he was having trouble putting together a scoreless third of an inning streak against the A's last time out. Perez's reward for a job poorly done is a start at Coors Field. Perhaps the most unjust punishment.

Jordan Lyles was the spoils of the Dexter Fowler trade. I've seen Jordan Lyles pitch. I refuse to believe Jordan Lyles is good at anything except for maybe a hidden talent that he isn't sharing with anyone. And yet, somehow, Jordan Lyles is 3-0 with some solid peripherals with Coors Field as his home park. Baseball is too weird for me sometimes.

Thoughts: The problem I have with the Rockies, when I idly notice them because I've lowered myself to acknowledge the Nation League, is I can't tell their starters apart. They're the West Twins in this regard. But instead of Create-A-Player white guys littering the rotation, they have latin fellas that I can't differentiate at first blush. Juan Nicasio is a victim of my NL intolerance.

Poor Robbie is getting battered around lately and his combination of high BABIP mixed with a low LOB% is particularly unfortunate. Mix in an inflated career high HR/FB rate of 11.5% and I'm not sure Coors Field is the best place to expect Robbie to turn things around. Of course, I'm sure the Rangers were banking on Robbie's other-worldly 60.4% ground ball percentage when they jury-rigged the rotation to ensure he would make this start in this setting.

Thoughts: Jorge De La Rosa is Juan Nicasio. I'm sure of it. Juan Nicasio is a shape-shifting mutant and someone should look into this.

Colby Lewis, considering all the obstacles and doubt that he'd even be able to pitch again, has been excellent. That said, thank our lord and savior Don Welke that the Rangers Macgyver'd the rotation so that Colby won't pitch at Coors.

Thoughts: Matt Harrison: Definitely well read on the physics of flight with the application of air density. 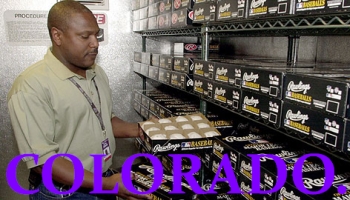