I guess it's pretty rare that the most important series of the season comes in the middle of June but for these Rangers, that's probably true right now. Seems like a lot longer than seven weeks ago that the Rangers were in Oakland finishing up a sweep of the A's to move into first place in the AL West. Given how things have gone since then, it seems amazing that that ever happened.

Now the Rangers are under .500, in 4th place, and have someone named Brad Snyder featured prominently in the lineup. For the Rangers, if they don't play well in this series, or have the results to back it up, there's a good chance that Jon Daniels will start to field a few more phone calls on the remaining players with value. Should the Rangers win a few games in this series, perhaps that does enough to allow the front office to see how things play out over the next month or so. It's not like anyone else is running away with the American League. I mean, other than the A's that is.

So, in mid-June, the Rangers play to essentially keep the band together long enough to see if a Wild Card spot is viable. Or, at the very least, you hope they play to make sure things aren't entirely too easy for the A's.

Here's a breakdown of the pitching match-ups against those shit-ass A's:

Thoughts: Leave it to the A's to convert a busted reliever prospect into a starter and have it work out pretty well rather than have him become Tanner Scheppers. Then again, surely a .235 BABIP and 90.9% strand rate is sustainable, right?

The last time Colby pitched in Oakland, he broke. All that and Trevor Cahill wasn't even the opposing pitcher. Now he's taking his .394 BABIP to Oakland against a team that's been raking. Gulp.

Thoughts: Here we go again. Maybe Coco Crisp has a sprained pinkie or something and doesn't pester Yu or Brandon Moss remembers that he's Brandon Moss and doesn't hit a couple of home runs and Yu Darvish can make it out of Oakland with a decent start for the first time ever.

I don't know that I could pick Tommy Milone out of a crowd of two people so it makes sense that he's having a decent season in Oakland. 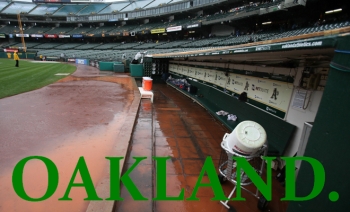