The Rangers aren't very good. The Tigers are only sort of OK until October rolls around. Should make for an exciting set of late-June American League baseball.

The real news, of course, is the return of Ian Kinsler to Arlington. Kinsler was a big part of the best years of Texas Rangers baseball but then he went half-Hamilton in an ESPN The Magazine interview after being traded to Detroit over the winter. In the interview he expressed a desire to see the Rangers would go 0-162 this season and basically said he felt betrayed by GM Jon Daniels. Well, the joke is on Kinsler because 35 times this year the Rangers have ruined his 0-162 dreams. Suck it, Ian!!

Of course, if Kinsler truly still has ill will towards the Rangers, he's probably pretty happy with how things have turned out. The Tigers are in first place -- albeit, in classic lackadaisical regular season Tiger fashion -- and the Rangers are a few games away from worrying if they'll even manage to keep the Silver Boot in Arlington.

It'll be interesting to hear the crowd's reaction to Kinsler's return. They gave Mike Napoli a hero's welcome when he came back with Boston. They booed Josh Hamilton out of The Ballpark in a scene that rivaled only seeing Monopoly money raining down from the upper decks at Safeco when A-Rod returned to Seattle with the Rangers in 2001. The home team had an especially warm reception for David Murphy when Cleveland came to Arlington a few weeks ago. Nelson Cruz came back to cheers and maybe a smattering of boos that very well could have been "Cruuuuuz"s.

Kinsler, however, was always sort of an antagonist who fans either loved or hated around here. The fact that he spoke bitterly about the team after departing likely didn't sway any fans to his side. I wouldn't be surprised to hear more boos than cheers, and I think, ultimately, that would be a shame.

Even though Kinsler seemed grumpy with the media at times, and has voiced opposition to being forced into a policing leader presence in the clubhouse, he was always 100% about kicking ass when he had TEXAS across his chest first and foremost and I don't think there was ever a second motivation to consider for him. He just wanted to beat the other guys.

I think that should be applauded even though he wears the wrong colors now.

Now the Rangers are the other guys.

Here's a breakdown of the pitching match-ups against perpetually underachieving regular season Tigers:

Thoughts: One of Colby's best starts since his return from Frankenstein's hip resurfacing came back on May 25 against these Tigers in Detroit. Colby went 5 2/3 innings of two run ball against a very good Tiger lineup. If Colby can replicate that outing, we'd be happy.

Hey Drew, how about some vowels there, champ? What do you say? Smiley good with you?

Thoughts: You know it's a bad season when the games start to blend together in your mind and you can't distinguish the last Nick Tepesch start from any of the other four-runs-in-five-innings performances that the Ranger starters have been so keen on the last few weeks.

When the Rangers lost Prince Fielder for the season back in May, they traveled Detroit and beat up on the Tigers while taking three of four games. It gave us hope that maybe the Rangers would rally around all their injuries and stay competitive throughout the summer. As we know now, it was just random wacky baseball variance. The only Tiger starter to hold the Rangers down in that 35-run series outburst was Anibal Sanchez.

Thoughts: Did you know that Rick Porcello's first name is actually Frederick? His middle name is Alfred. Someone is trying really hard to deny that he's a Fred.

The Ranger starter on Thursday is actually official listed as TBD. I figure it's between Nick Martinez and Joe Saunders so I listed Martinez because I don't want to think about Joe Saunders at all ever. 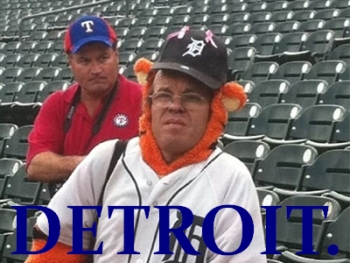 Rangers' Record vs. Detroit: 3-1 (All at Comerica Park)