Series Preview: Texas Rangers @ Toronto Blue Jays - Do we have to?

Share All sharing options for: Series Preview: Texas Rangers @ Toronto Blue Jays - Do we have to?

I have some good news and I have some bad news. The good news is the long arduous All-Star break is finally over and baseball resumes tonight. They say the day after the All-Star Break is the worst sports day of the year because it is practically the only day of the entire year where there are no sports games. Well, MLB extended the All-Star break to four days so now we have two worst days of the year. Remember, though, that this is the good news. It's all over and baseball is back!

The bad news, however, is the short and pleasant All-Star break is ruefully over and Texas Rangers baseball resumes tonight. Lest we forgot while nothing was happening, the Rangers are the worst team in baseball and are coming out of the break with a season-long eight-game losing streak. I miss the Home Run Derby already.

Here's a breakdown of the pitching match-ups against the contending Canadians:

You know R.A. Dickey is scoffing at the whole Brady Aiken mess today.

Thoughts: If Marcus Stroman can make it as a starting pitcher out of Duke University, there's hope for future top of the 2015 draft pitching prospect Michael Matuella.

I love Colby Lewis. But Colby Lewis version 2014 is the current No. 2 starter of the Texas Rangers and that really says it all.

Thoughts: When Mark Buehrle was a kid in grade school and was asked to draw what he wanted to be when he grew up, he drew a picture of himself as a pitcher giving Texas Rangers hitters fits.

When Nick Tepesch was a kid in grade school and was asked to draw what he wanted to be when he grew up, he drew a picture of himself as a super cool dinosaur! 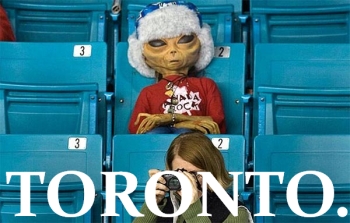 Rangers' Record vs. Toronto: 1-2 (All at The Ballpark)