The number one source for all your reverse standings updates

Good morning. The Rangers are still the only team in baseball without at least 40 wins and that is depressing. However, if your glass is half full, that just means that they continue to lead in the race to pick first in next June's amateur draft!

Stefan Stevenson replaced Drew Davison on the Rangers beat as Davison was promoted to cover the Cowboys for the Star-Telegram. Stevenson's reward was watching the Rangers lose their fifth straight series.

Evan Grant writes about Elvis Andrus at a career crossroads of sorts with Ron Washington having a post-All-Star break meeting with him to surely reconfigure his sacrifice bunt brainwashing.

Jim Reeves pens a real nice, extensive piece on the great Eric Nadel just days before Nadel is inducted into the Baseball Hall of Fame.

FSSW's Steve Hunt writes that the Rangers are monitoring Chi Chi Gonzalez's workload in Frisco as he continues to make a successful transition to Double-A ball.

Toman handles the MLB.com Notebook and covers the status of Alex Rios' ankle, Nick Martinez's return to the rotation, and updates on various rehab efforts.

Stevenson has notes on J.P. Arencibia claiming he found his swing in Round Rock, Miles Mikolas' excitement to pitch against Jeets, and Dan Robertson's fluidity, among other items.

MLB.com's Alec Shirkey previews tonight's series opener of the Rangers' only trip to Yankee Stadium with Mikolas on the mound facing someone named Shane Greene. It's like a battle of which rotation has been kicked in the beans more this season.

Lastly, EG has a blog post up because apparently the General Manager of the Myrtle Beach Pelicans is offering to have a prostate exam done during the 7th inning while singing 'Take Me Out to the Ballgame' if people like the Facebook page of a 10-year-old girl with brain cancer.

No word on if the exam will be done by this guy: 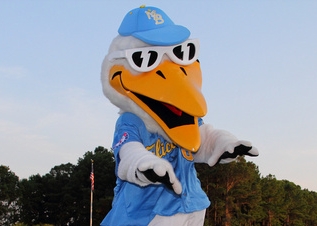 But it certainly gives new meaning to the phrase "seventh-inning stretch."