In the ten years between 1976-1985, the Kansas City Royals made the postseason seven times. They lost a World Series in 1980 and won a World Series in 1985. They had arguably the best player in the American League, George Brett, in his prime. They were the preeminent rivals of the Billy Martin Bronx Zoo New York Yankees in the AL playoffs for a decade. And after beating the St. Louis Cardinals in Game 7 of the 1985 World Series, they disappeared forever.

I don't mean that they fell into the Springfield Mystery Spot -- they did still purportedly play baseball. I mean they've been the most also-ran of forgotten sports franchises since 1985. It took the Rangers from 1972 until 1996 to make the postseason and after 1999, they didn't return to the playoffs until they made the World Series in 2010. That decade from 1999 until 2010 was torturous for us Rangers fans after we got a taste of playoff baseball. Imagine nearly tripling that wait for October.

What the Pirates were in the National League until last season, the Royals have been in the American League. A year after those Pirates proved a forgotten team could make their return to the postseason, the Royals are knocking on the door in the AL.

It's August 22 right now. We've got about 35 games or around 5 weeks of the season left and the Royals are in first place in the AL Central. Obviously, the smart money was on the Detroit Tigers running away with the Central like they always do. They have a rotation littered with Cy Young winning aces. They have an all-time great right-handed hitting Miguel Cabrera coming off back-to-back MVP seasons. And they've always sort of skated through the regular season before turning it on in the second half to win an easy Central division by a handful of games.

And while that may still end up being true again this season -- the Royals lead is a meager 1.5 games -- for the Royals, just tasting first place this late in the year has to be incredibly exciting for their fans. We would know. We were there four years ago. For Royals fan, however, it's been 29 years.

So, it makes sense then for the Rangers to beat them, spoil their fun, and make sure no one enjoys anything until Texas wins the dang World Series. 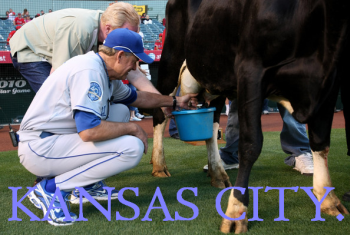