If you've spent much time in the Game Day Thread comments, you might have seen me intentionally rooting against the Texas Rangers. That might seem sacrilegious, and, at the very least, a bit dirty. But for the Rangers in 2014, losing meaningless games might be the best thing that we can hope for.

Don't take my word for it. I'm just a sports fan. That, by definition, means I'm being an irrational person. But you can take Rangers' General Manager Jon Daniels word for it. Here's JD on WEEI 93.7 before the Trade Deadline:

"On some level the rules are in place to create parity. Finishing at the bottom of the standings, we have a chance to do it this year," Daniels said. "We certainly don’t want to, we weren’t designed that way. The system is set up that it’s an enormous advantage to finish last. It’s something we need to look at as an industry.

"We have an incentive to lose on some level and nobody wants to acknowledge that and nobody builds their team thinking to lose. In the NBA, you finish with the worst record, you’ll still have to go through the lottery. You’re not guaranteed to pick first. In baseball, not only do you get to pick first, but then you get a bigger draft budget for your pool so you actually get the access to the top player, but you also get the advantage of moving money around and more money to spend throughout the draft.

"Same thing on the international side. Plus you get the top waiver claim all winter and into the first month of next year and you get the top Rule 5 pick. Four or five times over you have an advantage in terms of acquiring players in almost every avenue except for trades and major league free agency."

That is a whole bunch of things that could make losing in a hopeless year very appealing. Or, at the very least, make sitting through this season more tolerable.

And so, that brings us to this series. Who'd have guessed that the Rangers would play a meaningful series against the Astros in August but instead of anything involving contention or playoff-jockeying, it is to see which team can lose the most spectacularly?

Let's take a look at where things stand: 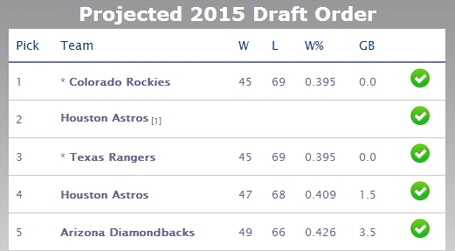 Were the season to end today, the Rangers would pick third in the 2015 draft. That's because the Astros bungled the first pick this year and are guaranteed the No. 2 pick next year and the Rangers and Rockies are tied for the worst record in baseball with the tie-breaker being lowest winning percentage in the previous season. So, there's the scary proposition of the Rangers finishing with the worst record in baseball and picking third. Then, as you may notice, just a game and a half behind the Rangers in being bad at baseball you have the Astros.

The Astros tank game has been on point for nearly a half decade now. Were the Astros to turn on the loss machine and bottom out the rest of the season, they could find themselves with the first and second pick in the 2015 draft, a billion dollar draft pool budget, and no better than the third pick for their division rivals up north.

Then again, the Astros have had the first pick in the draft the last three years. They haven't had the Silver Boot since 2006: 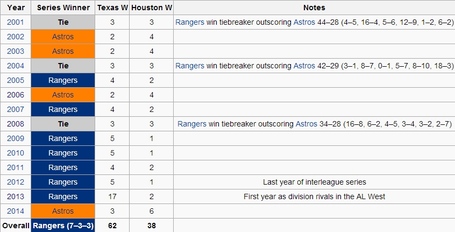 The Rangers and Astros play ten more times this season beginning with this series. The first team to 10 wins in 19 meetings wins the Lone Star Series and the Silver Boot. The Astros lead the season series 6-3. In a year where the Rangers have marketed the team based on "Real Texas Pride" and "Real Texas Baseball" maybe the Silver Boot is the only thing left worth fighting for. 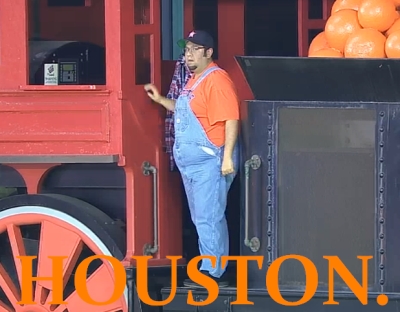 Houston's Recent Results: 0-3 swept on the road against the Philadelphia Phillies