You're unlikely to be coming here to discuss last night's game.

So, the reason Ron Washington resigned wasn't going to stay secret forever, and Jamie Kelly of The Scoop Sports posted last night that it stems from an alleged sexual assault.

I've always thought that baseball, at least in comparison to football, was more the gentleman's game.  Football is coarse and vulgar, baseball isn't.  Baseball is the undubbed foreign film, and football is Transformers.  Football has Aaron Hernandez and Ray Lewis and Pac-Man Jones, and baseball has Juan Dominguez and Mr. Santos.  Even thinking of drug scandals, I immediately think of Nate Newton and Sam Hurd... while in baseball I think of Doc Ellis, who played under the influence of a nerd drug and not something "serious."  The scandals in baseball always seemed to be gentry scandals, like gambling and racial slurs and taking drugs because you're such a hard worker your body can't keep up instead of just trying to tie one on because you're trashy.

So when I hear Jerry Jones has been accused of sexual assault I say "big deal, he probably just wants to get one without Jimmy involved just to prove that he can."  It's football, and it's Jerry, and that's the kind of trashy stuff I expect, but I don't expect that in baseball.

Of course, it isn't like that, and it never has been.  Ty Cobb hated Babe Ruth because he said he was half-black and once beat up a heckler that didn't have hands, so I guess baseball players are as loutish as any other athletes.  Ball Four has plenty of anecdotes that would make Gloria Steinem spin in her grave if she was dead yet, but she isn't, so I guess it would make her spin in whatever vagina-shaped bed or chair she spends most of her time in.

So I guess that if Ron Washington, or any other Ranger for that matter, turns out to have committed a sex crime I guess I'm not entirely surprised but I kind of wish I was.

I was at the game last night, but that's okay I was able to soak up my tears with hot dogs and dutch angles. 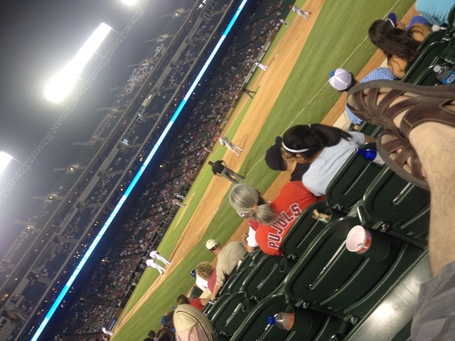 Jeff Wilson speculates about the 2015 lineup while glowering darkly at Jamie Kelly.  I poop you not... the article includes the phrase "considering how no one can keep a secret these days."

T.R. Sullivan has a news flash for you in his recap: the Ranger offense is bleeping terrible.  He also has an injury update.

According to Don Draper (or, more specifically, the old pro copywriter who taught Draper his trade), nostalgia means "pain from an old wound."  That would be the perfect description for Sullivan's update on Josh Hamilton, as his lingering late season injury will make you misty for days past.

I had blandly neutral feelings about Tim Bogar, until I read how his mentors described him... organized, smart, strong-willed, fiery temper.  Crap, is this Buck Showalter?

Apparently, the nagging injury that is keeping Josh Hamilton sidelined is an achy-breaky heart, as he misses his little talks with Ron Washington.

Arizona is seeking to interview Thad Levine for their general manager job.

Evan Grant tells us that if Jurickson Profar checks out okay today that he will be cleared to play in the Arizona Fall League.

Apparently Bogar is being graded on a curve, because Calvin Watkins gives him positive marks for observing that Elvis Andrus has sucked lately.

Finally, last night's starter for Anaheim looked like one of the guys in this Tullamore Dew commercial.