Before last weekend, the Rangers held a lead on the Colorado Rockies in the reverse standings by 5 games. Of course, that means owning the dubious mark of having the worst record in baseball -- a place the team is likely trying to avoid. However, as I'm sure you're aware by now, it also means getting a nice parting gift from MLB to the tune of the first pick in the 2015 draft, waiver priority over the offseason, the first pick in the Rule 5 draft, the largest bonus pool in the draft, and the most international spending allocation.

I would assume the Rangers believe this season is something of an "everything that could have gone wrong went wrong" disaster and they're going to try again next season in earnest. For a team like this, in a lost season, with all MLB bestows on the team that finishes worst, it would be foolish to not grab it while it's being given. Imagine the Rangers unshackled in the international market again. Or, after years of trading talent away to get over the hump in contending seasons, think of the immediate farm replenishing the Rangers can do at the top of every round of the draft.

The Rangers held a 5 game lead on the Rockies for the ultimate consolation price with 16 games to go. Now, after deciding it would be a good idea to sweep the Braves out of postseason consideration, the Rangers "lead" is down to a game and a half. The Rockies were swept in St. Louis over the weekend and were beaten by the Dodgers last night. The Rangers have found arguably the worst time to go on a winning streak.

Texas has had miserable slides in September over the last few seasons and now they've found a different way to screw things up.

And then there's the Oakland A's. The consensus best team in baseball all season are having their 2013-2012 Rangers' seasons all wrapped up in one bitter second half. The A's held a 6 game lead in the AL West on June 21. They maintained a 4 game lead in the West as recently as August 10. By last Friday, they trailed the Angels in the West by 11 games. While the Rangers are having the worst 70 or so stretch in franchise history, the A's were working on a historic collapse. That is, until they ran into Fernando Rodney and the Seattle Mariners.

At the lowest of their low, the A's had lost 25 of their previous 40 games and most recently lost series to the lowly Astros and White Sox. After getting beaten by Seattle on Friday night, they were hanging onto a Wild Card spot by a half game over the Mariners. With a loss to the Mariners and King Felix on Saturday, they would have been out of a playoff spot completely. After Hernandez left with the game tied 2-2, Rodney came in in the 10th inning and walked four A's in the frame to walk in the winning run. The A's managed to beat the Mariners on Sunday as well to bump their lead back up to 2.5 games.

The A's obviously are not out of the woods just yet. With two weeks to go, the A's lead the Royals by a single game for the top Wild Card spot and the Mariners--after losing to the Angels last night--still trail them by only 3 games. And here come the Rangers. The A's and Rangers will face each other seven times over these final two weeks. The A's need to beat the Rangers if they want to make it to October. The Rangers need to lose to the A's if they want to enjoy the spoils of being the worst. Then again, the Rangers could always just beat the A's and enjoy being the team that ended their season while pinning the Historic Collapse label on them.

In a way, I guess the Rangers can't lose...unless maybe they win... 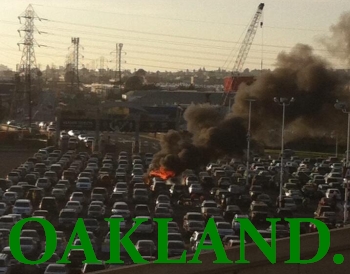