Make no mistake, the Rangers are on a six game winning streak because they wanted the Angels to win the West before they got to town. Before last weekend's series with the Braves, someone on the Rangers figured out that with the way things were going, the Rangers would likely be faced with the all too real possibility of playing this weekend series in Anaheim under the threat of watching the Angels storm the field to celebrate winning the AL West. That wasn't an option.

Maybe it's because pride finally kicked in, but the Rangers decided it was important to not let their rival celebrate against them. Of course, it didn't hurt that they've played perhaps the team from each league respectively who've been choking away their seasons the hardest of late. After sweeping Atlanta virtually out of the NL Wild Card conversation last weekend, the Rangers went to Oakland and swept the A's to put their playoff hopes in serious jeopardy.

So crushing dreams and playing with pride took precedent, sure, but it also took a backseat to making sure the Angels celebrated the West on Texas' terms. That championship didn't come with a final out dogpile on the mound with the Rangers slowly walking off with their heads hanging. The Angels won the West watching TVs as the Rangers put them in with a 9th inning rally against the A's on Wednesday. You're welcome, Anaheim.

Now please return the favor by playing your best so we can get our top draft pick reward. 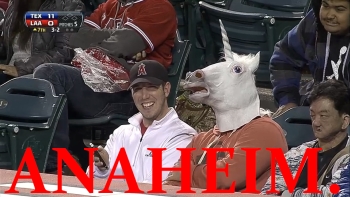