Since the beginning of June, the Rangers have won exactly four baseball series out of 26 tries. One came when Adam Rosales single-handedly beat Chris Sale and the White Sox to pull out a 2-1 series win at Cellular Field. Another came in the final series in July when Yu Darvish and Colby Lewis helped the Rangers eke out a 2-1 series win over the New York Yankees at The Ballpark. The other two series wins? June 13-15 in Seattle against the Mariners and August 25-27 in Seattle against the Mariners.

The Mariners currently have a record of 75-63. Since they still have the third best run differential in the American League, they have a Pythagorean W-L of 81-57. The Mariners are 6-9 against the Rangers this season. I like to think, should the Mariners miss the playoffs, it's because they couldn't beat Texas. In fact, of the teams in the American League, the only ones the Mariners have a losing record against is (surprisingly) Minnesota (2-5) and (unsurprisingly) Baltimore (2-5).

On the flip side, let's take a look at the current reverse standings via MLB Trade Rumors: 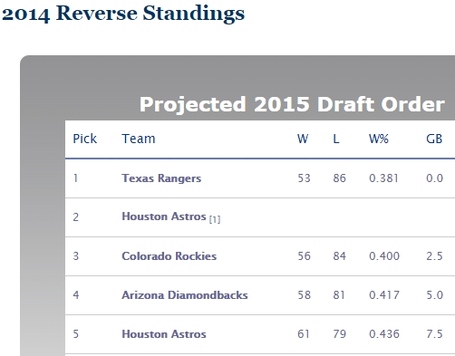 Were the season to end today, the Rangers would own the No. 1 pick in the 2015 draft via having the worst record in baseball. The 2.5 game "lead" over the Rockies is the Rangers' largest of the season. However, should the Rockies tank strong in this final month, and the Rangers get slotted at No. 3, or worse, by virtue of Houston owning the second pick because they couldn't sign Brady Aiken, the Rangers might consider exposing the Mariners as pretenders as a mistake. After all, of the teams in the American League, the only ones the Rangers have a winning record against are Chicago (4-2), Minnesota (5-2), and these Seattle Mariners. 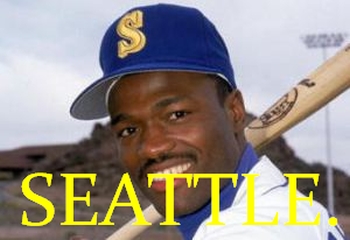