One explanation is the American League seems incredibly weak this year. The A's looked like an elite team for most of the year before turning into a pumpkin. The Orioles are running away with a subpar AL East. The Royals are winning their division, for crying out loud. Seattle is currently in a playoff spot, if that doesn't say it all.

The Angels -- again, with the best record in baseball -- have someone named Matt Shoemaker as arguably their No. 2 starter. Jered Weaver, the ace, is still turning home mountains into wins despite his molehill of a fastball. C.J. Wilson is having easily his worst season as a starter. You know who has been better than Hector Santiago this season? Mostly anyone. Right now, the Angels don't even have a fifth starter. Without Garrett Richards and Tyler Skaggs, Cory Rasmus has started the last couple of times the Angels have needed a fifth starter in all-out bullpen nights.

Yeah, yeah, so there's the offense and an improved bullpen. So they're the 1999 Texas Rangers. There's Mike Trout. There's Pujols and Hamilton and all those other guys they had on the team the last couple of years when they weren't the best team in baseball. I think we all know what's going on...

You win this time, God. 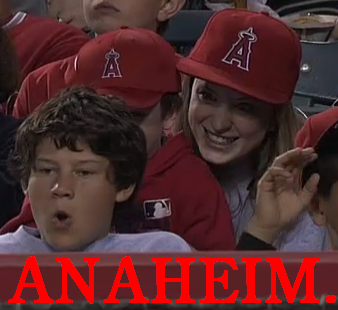