Hello, LSB. I'm Coylio, and I'm here to take you on a journey today.

I'm about 90% confident I've watched the full 8 minute video clip of the RoogiePunch brawl more times than any other human on the planet, including the MLB officials who had to watch it to make heads and tails of who was to get suspended/fined/etc. But I'll get to that later.

So I've been stuck at home today and the Rangers don't play for another couple of hours, and I've been Zaprudering the brawl video for about the umpteenth time. You all probably know: it's hard to keep track of what's going on, as there's over 50 men running onto the field, pushing, shoving, scrapping, and I believe there was even a punch or two. It was pretty apparent after two or three watches that Rangers closer Sam Dyson was a major player in the happenings, but today I'm going to reveal to you shocking and controversial evidence that not only shows Dyson to be one of the day's biggest heroes, but also gives birth to a new Rangers' nemesis.

We'll pick up after The Punch. You all know how it went. Rough slide. Big punch. Utter chaos as both benches clear. 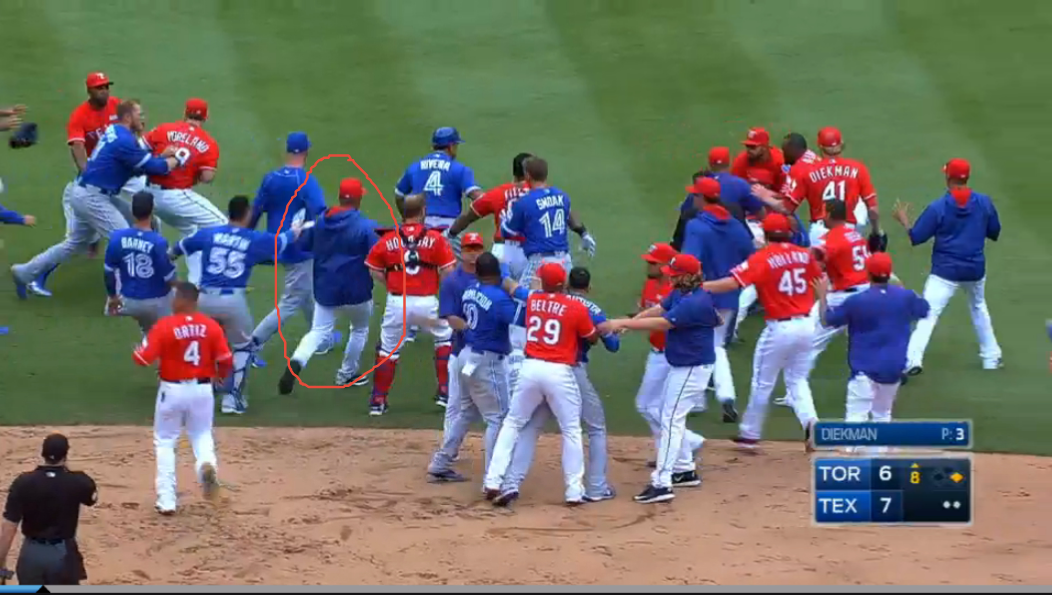 Here's the scene. Circled is Rangers' Manager Jeff Banister. He's hard to keep track of in the blue hoodie, so I'll do it for you. The man behind him (#55) is Blue Jays catcher Russell Martin. Russell Martin is a dickhead.

Soon after the above scene the camera cuts to a closeup shot of Adrian Beltre holding up the lifeless corpse of Jays' right fielder Jose Bautista. It's a great shot, and it's only 2 or 3 seconds, but it's a crucial loss of evidence. The Stemmons Freeway sign of the Rangers' brawl, if you will. 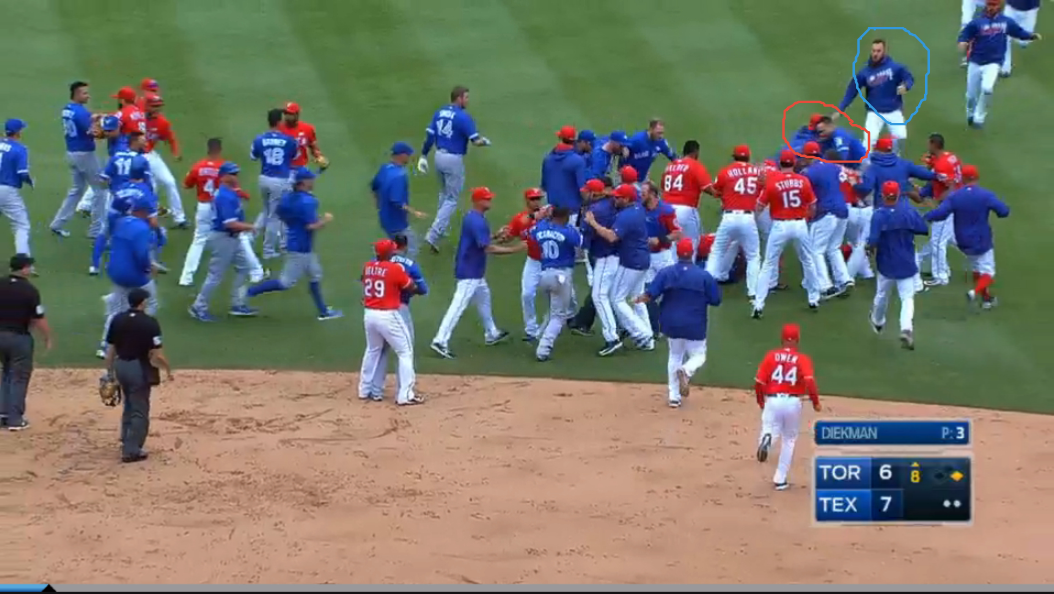 This is almost the instant FSSW goes back to the wide shot. Circled in red again is Jeff Banister, and along with him is our friend Russell Martin. Sometime during the cutaway the two came together. It's right around the area Odor was at the time, so if I had to take a stab I'd guess Martin was trying to get to Odor and Banny was trying to keep him from that.

Circled in blue is our protagonist Sam Dyson. Also wearing a blue hoodie, also hard to keep track of. A thing to keep in mind: he'd just spilled out of the bullpen. He is approaching the bedlam at a run, and has a full head of steam, along with a straight on view of the Banister/Martin tussle. Things are about to get lit. 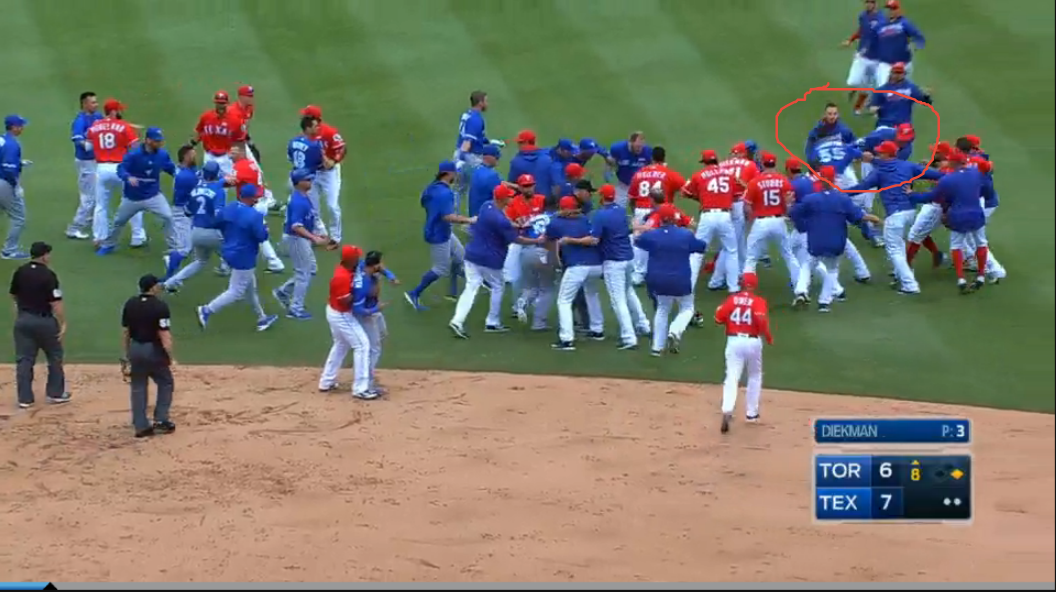 Our three main characters are now close enough to be enclosed in the same circle. As you can tell, Russell Martin is about to throw 52-year-old Jeff Banister to the ground.

Russell Martin is also about to get steamrolled. 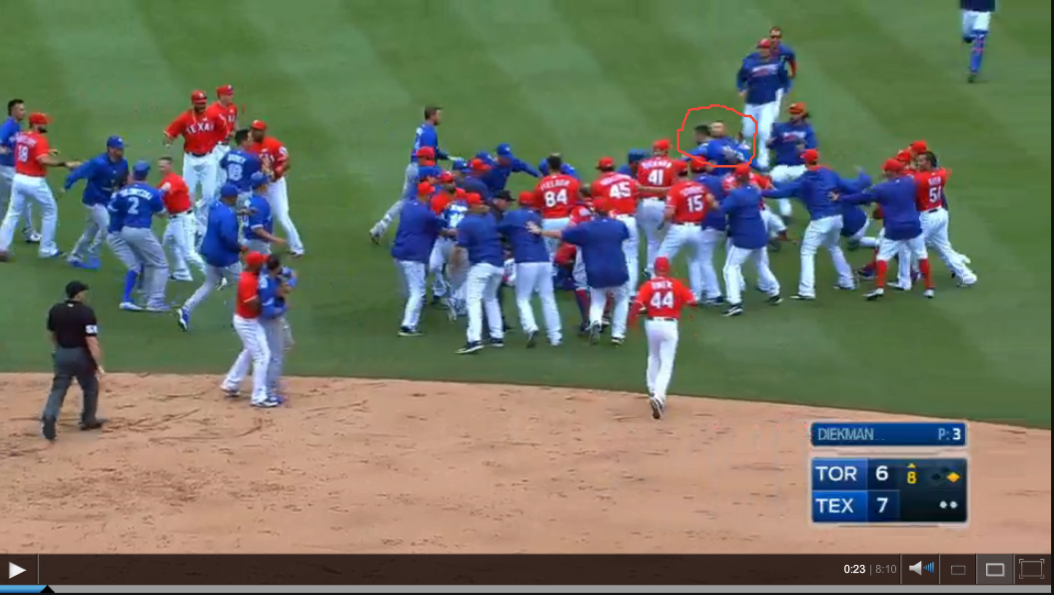 Here's the moment of contact. There was no hesitation, no break in his stride. In the split second it took Martin to make Don Zimmer out of ol' Banny (you can see his poor ol' Bannybutt about to hit the ground) Sam Dyson closed the gap between himself and Martin and leveled our new nemesis, then drove him into the ground with impressive form. 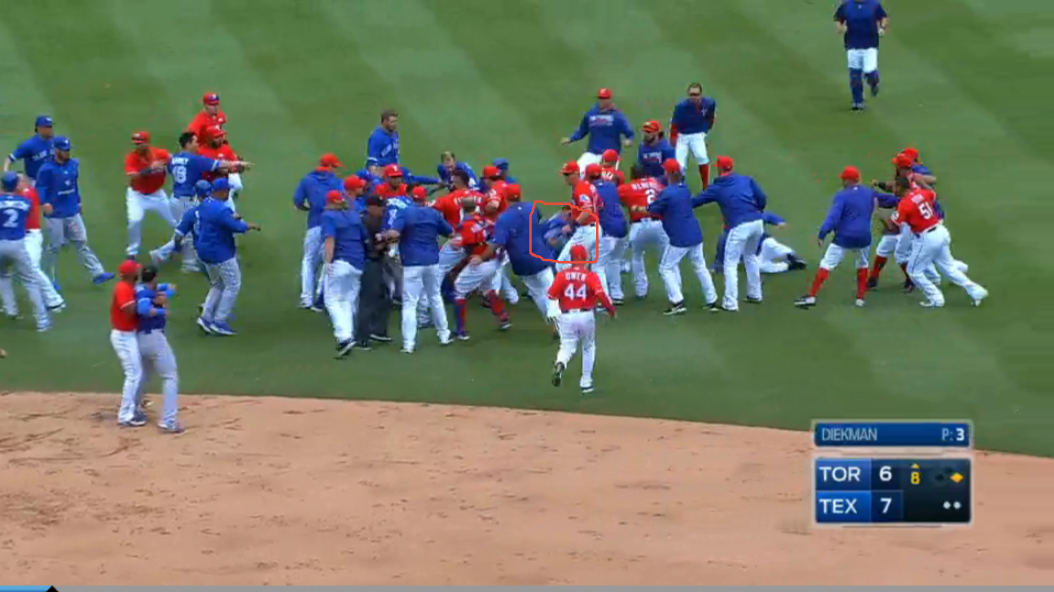 Now that you have the basics, I think you're ready for it .gif form.

Dyson comes in from the top of the screen and just levels him. As you can see, the two were almost immediately dogpiled. You lose track of them for about thirty seconds as things between the two teams start to calm, and the main goal shifts from "hurt everyone" to "break everything up." 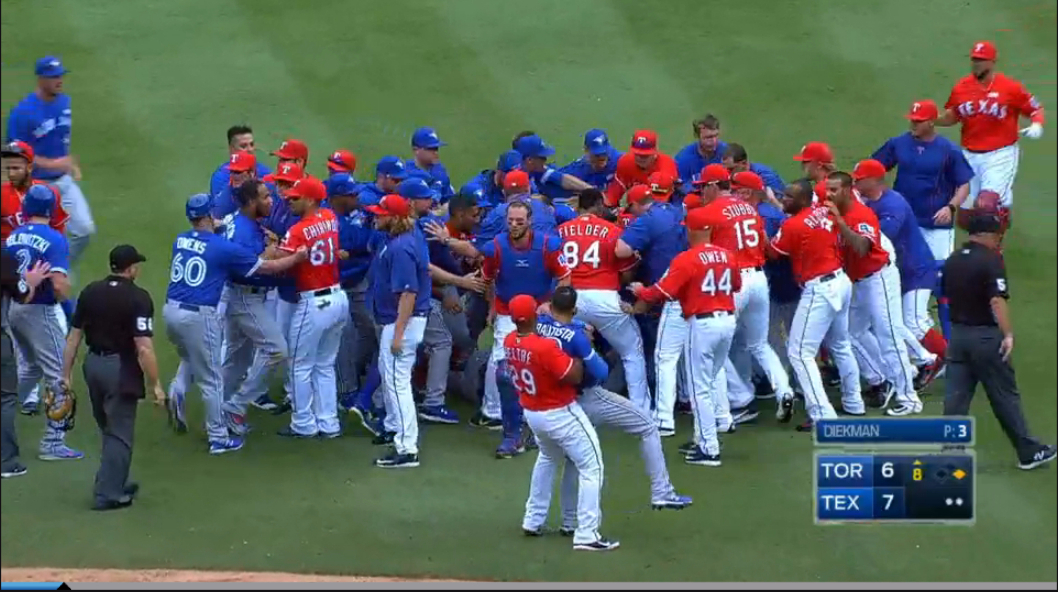 Notice Beltre and Baby Bjorn Bautista in the foreground.

After this shot, more shuffling, more breaking up, and soon it starts to look as though they're all broken up, except for one scrap... 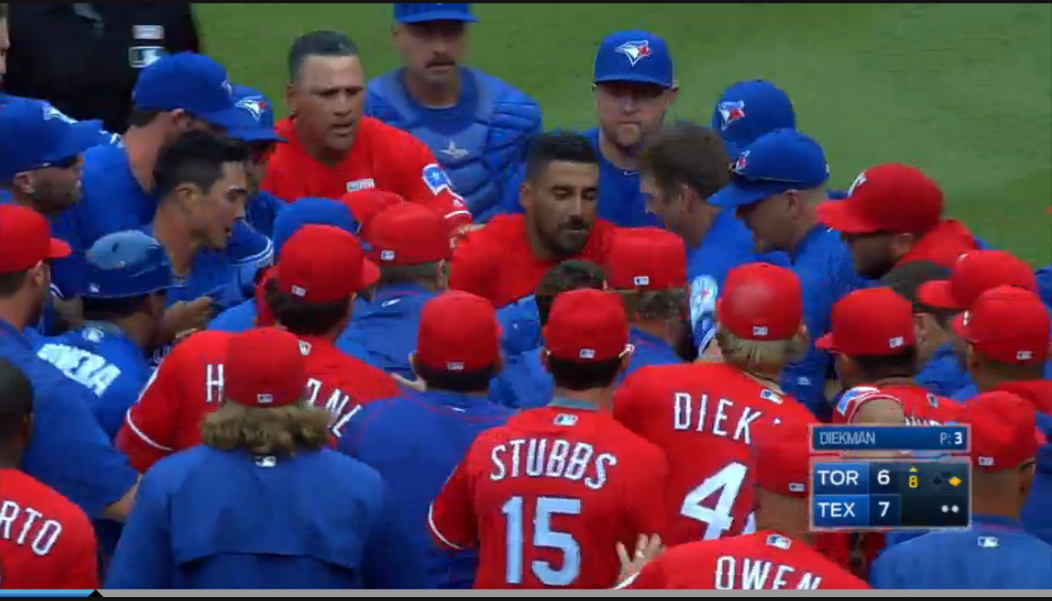 Who's at the bottom of that pile? I can't tell! If only someone would pull them up... 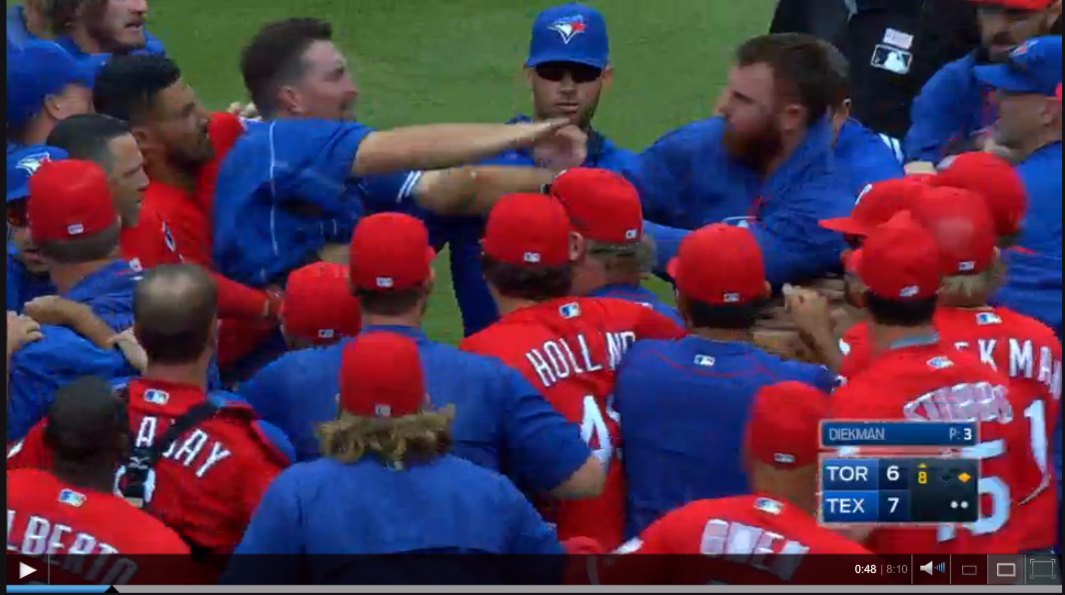 At some point at the bottom of that pile he became entangled with BlueJays bullpen catcher Jason Phillips, whose playing career was more notable for his goggles than for his -1.7 career bWAR. They both come up redfaced and swinging before being pulled away. Then we're gifted a shot of Sam Dyson post-fight. 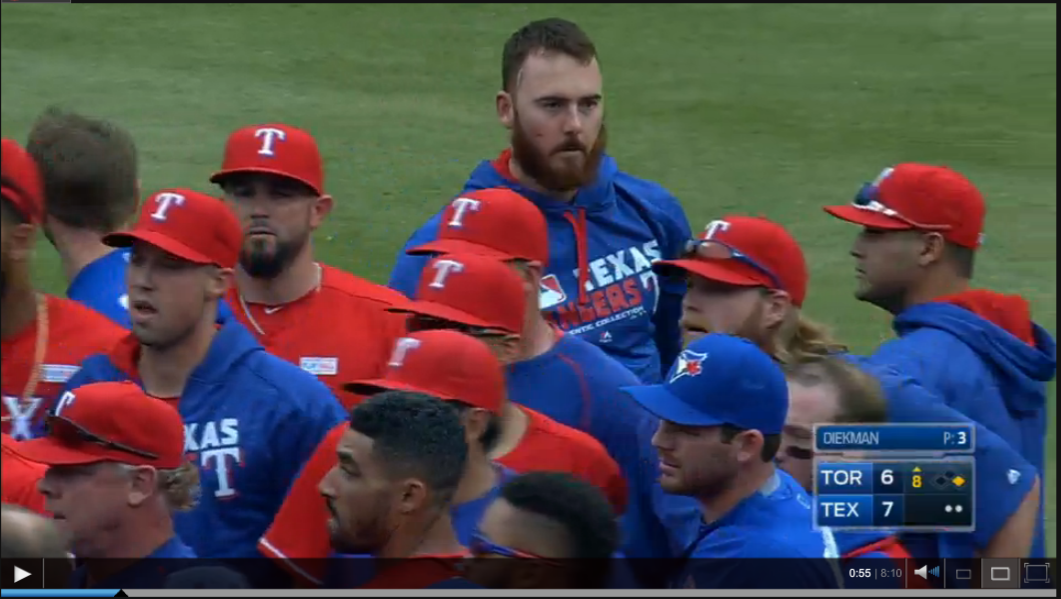 Compared to that of his counterpart... 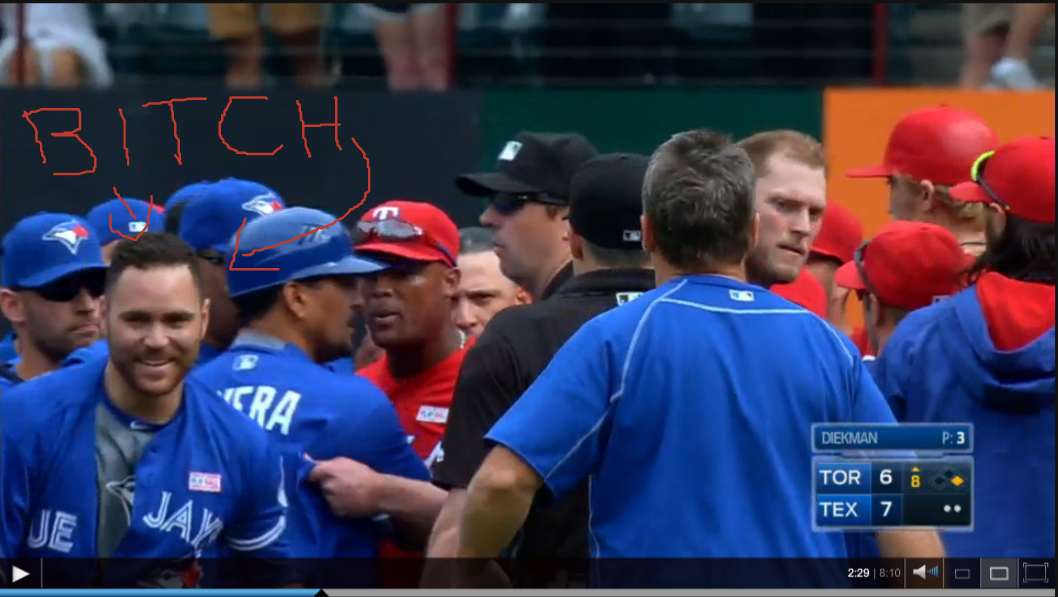 Now, there's a few things to be taken away from this. Number one, I really love Sam Dyson. I love his game, I love his bits, and I loved the fact that when he sees someone fling his manager to the field he doesn't hesitate to take a motherfucker down.

Number two, Russell Martin is a puke. He's got a bit of a reputation as such but I don't think I've ever seen anything like that, besides the aforementioned Pedro/Zimmer deal, but in this case the manager being thrown down was absolutely playing the role of peacemaker.

Number three, whoever was in charge of watching this video and levying suspensions did a terrible job. Russell Martin went unpunished. Sam Dyson, while a hero and a patriot, probably deserved more than just a fine. As I said before I've watched it many, many times and still am yet to see this punch that Elvis Andrus threw that sat him down for a game. They really should leave it to the nerds like me.

I could do this all day. It really was one of the craziest things I've ever seen on a baseball field, and there was so much context and nuance that the politics of it are equally as fascinating to me as the baseball side. I expect I'll watch it a few more times this season alone, especially if the Rangers and Jays are to meet in the playoffs. And if the fates allow such a magical happening, I for one will be cursing newly-revealed buttmunch Russell Martin equally as hard as I will Jose Bautista.