As Levi Weaver brilliantly chronicles for The Athletic, the Texas Rangers have spent several years chasing the successor to Mark Teixeira. With the acquisition of Nate Lowe, has Jon Daniels finally bagged the chimera that has eluded him for the better part of a decade? Here at LSB, opinions vary widely on that question. Based on AJM's recent poll, just 55% of respondents believe Nate Lowe will manage an .804 OPS or higher in the 2021 season. Presumably, the 45% who think Lowe will post an OPS below .804 have hedged their opinions on the sample he's shown at the MLB level thus far:

Each of these negative developments can largely be attributed to Lowe's inability to connect with fastballs at the MLB level. Lowe posted an appalling 48.9 Whiff% on 4-seam fastballs in his 2020 sample. This means that Lowe swung through nearly half of the 4-seam fastballs he saw last year. To show how bad Lowe was versus fastballs in 2020, look no further than Statcast's xwOBA statistic (expected wOBA).

Lowe was absolutely putrid against the fastball, posting just a .264 xwOBA. According to Fangraphs, a wOBA less than .290 is effectively "awful." It's hard to articulate how tough it is to be successful as an MLB hitter with a .264 xwOBA against fastballs, a pitch type that Lowe faced 70.8% of the time. Even though Lowe crushed breaking balls, to the tune of a .392 xwOBA, MLB pitchers simply adjusted and threw him fastballs, at every opportunity.

How could this promising prospect have gone from swinging through half of the 4-seamers he faced, when in 2019, Lowe swung through just 30.3% of the 4-seam fastballs that were thrown his way?

I'm not going to pretend to be more knowledgeable about baseball than Tampa Bay's hitting staff, but the answer to this question seems to lie in Lowe altering his swing significantly from 2019 - 2020. As you can see in the following clips from 2019, Lowe does a double toe tap, keeps his hands inside the ball, and unloads on these meatballs: (I'll start with the Orioles' highlights in honor of former LSB regular, and now Orioles scout, KevinWC)

Conversely, in 2020, Lowe has simplified his swing to a single toe tap, while bringing his hands further out from his body. In this clip, you'll see Lowe manages a home run against Jacob DeGrom. While it's a good ending to a plate appearance, it's the result of a bad process. Lowe looks uncomfortable against the heater, barely getting his foot down in time. As his hands get further from his body, he has to almost lunge out at the low and away fastball.

Fortunately, Lowe's 2020 swing does manage to maintain many of the components of what we want to see: 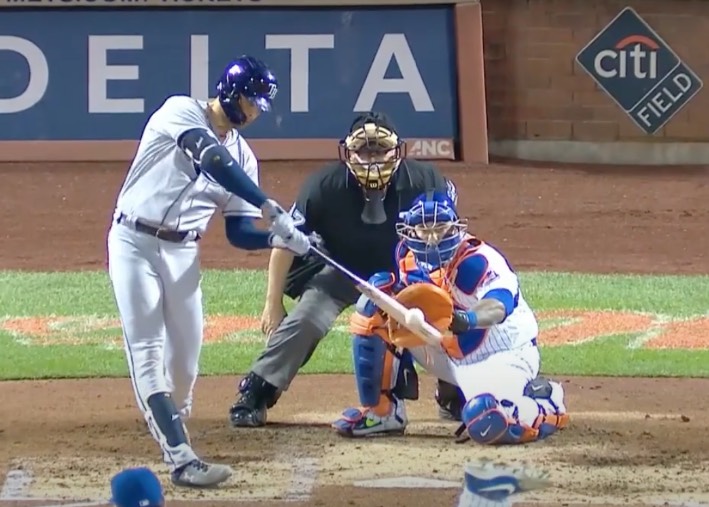 I would typically like to analyze these kind of pictures from a side angle, but was unable to find one for this specific situation. Lacking a better angle, we can still identify a number of positive developments. The placement of his back arm (left arm, in the case of a left-handed hitter) is especially positive. Lowe keeps the arm bent towards his body at an almost perfect 90° angle at the point of contact. Since his top half is lunging out a bit at this ball, that back elbow leaks away from his side, reducing the amount of torque he's producing. However, Lowe's ability to keep that elbow suspended at 90° allows him to punish this ball.

By keeping that elbow tucked in, Lowe's generating an immense amount of leverage to bring to bear against the baseball. Even though he's a bit fooled by DeGrom's heater, with the soundness displayed in the fundamentals of his swing, Lowe is able to drive this ball out for a dinger. If you're one of those old-school types who believes in the clutch gene, Lowe's solo shot was the winning run in a 2-1 victory over DeGrom's Mets.

As a brief addition to the swing conversation, Lowe also manages to keep his back knee, back hip, and back shoulder aligned to create a fundamentally sound swing path to launch this ball into the center field bleachers at Citi Field. His back foot and head are perfectly positioned, as are his eyes. When requesting he make swing changes, this is more than likely what Tampa Bay had in mind as the end result.

In the midst of his 2020 struggles, Lowe appeared to revert back to his 2019 swing. As we all well know, baseball's a game of timing, and revamping your entire swing in the middle of a high-stress pennant race is hardly ever going to lead to positive results.

As you can see from this first at-bat in his penultimate game of the season, Lowe has returned to his double toe tap. I'd add that the regression to his previous swing likely frustrated Tampa Bay's hitting staff, and further convinced their front office that he was an expendable asset. The two K's shown here come in Lowe's final regular-season starts in a Rays uniform. We can clearly see he's had a crisis of confidence in his simplified swing, and opted to return to the double toe tap:

From my perspective, I don't quite understand why they attempted to have Lowe build an entirely new swing, instead of giving him the latitude and time to adjust to big league pitching with his previous swing. It's important to note here that Lowe's second year of appearances in MLB in 2020 was the first time in his career that, upon repeating a professional level, he failed to dominate. I attribute this almost entirely to the efforts to change his swing from that which had been successful (double toe tap) to one that involved fewer moving parts (single toe tap), but seemingly messed with Lowe's timing against the fastball.

We should also not discount the role inconsistent playing time could have substantially influenced Lowe's struggles in MLB. I, like many here, am a proponent of the idea that prospects should be given every opportunity to succeed at the MLB level. Tampa Bay did not afford Lowe that privilege, often giving him playing time sparingly. To a team actively attempting to compete, as the Rays are, Lowe's development played second fiddle to being able to actively contribute to the big league club. That's why a guy like Ji-Man Choi was given significantly more playing time than a top 100 prospect.

From the optimistic side, it's a relatively simple fix: just let Lowe swing the bat as he comfortably had up until the 2020 season. Additionally, after searching through several dozen first basemen's swings, I've found the ideal double toe tap swing for Nate Lowe to emulate.

Our swing comp comes courtesy of Nick Johnson, whose injury plagued career limited him severely. Johnson was unable to play in the 2007 and 2011 seasons due to a broken leg and a debilitating wrist injury, and was able to play in only 24 games in 2010 due to other injuries. As a trivial aside, Johnson was also the first Washington National to get a hit in RFK Stadium in 2005. Overall, Johnson was also a poor defender and terrible baserunner. Fortunately, Lowe possesses above-average speed (55th percentile, according to Statcast), and projects as an average glove at first base. If Lowe manages to offensively produce at Johnson's prime years (2002 - 2009), where Johnson had an .855 OPS and a 126 OPS+, I'm sure we'd all be thrilled with the trade.

I know the quality on this one looks a bit like the Zapruder film, but you try to find clear video of an obscure big leaguer's first career tater in 2001:

Johnson times Hideo Nomo's fastball well, getting his front foot down in anticipation of the ball entering the path of his bat's barrel. Johnson stays within himself, and takes the energy produced from his hips to create the torque necessary to drive this ball out of the yard.

Here's our contemporary comp, Nate Lowe. Lowe, similarly to Johnson, recognizes fastball early, getting his foot down in time and staying consistent to the fundamentals we covered earlier. With this sequence of events, Lowe is able to whack Masahiro Tanaka's 92 MPH heater to the opposite field. Pitch recognition is quite clearly not a problem for Lowe:

Clearly, our Texas Rangers are not in position to compete, and will be able to afford Lowe the opportunity to play in 140+ games in 2021, barring a shortened season due to the ongoing Covid-19 pandemic. By granting Lowe the simple freedom to swing as he is accustomed to, I believe the Rangers can unlock his full potential. Ideally, a reversion to his natural swing leads Lowe to put up multiple seasons akin to Nick Johnson's 4.2 fWAR, .289 / .408 / .479 (.887 OPS), 138 wRC+ season in 2005. Feel free to offer up any hot takes, criticism, or good vibes for Nate Lowe in the comments, and be sure to check out his swing come Spring Training.