Swinging a bat is far from proprietary information. Nearly every American youth has, at one point or another in their life, picked up a bat and swung in an entirely unique fashion. From these first moments of youthful curiosity, superstardom emerges. Upon publishing last week's report on Nate Lowe's swing, there were a few questions related to what an ideal swing would look like.

I don't intend for this analysis to apply to Nate Lowe, but simply to stand as what I believe to be the optimal components of a baseball swing. When asked, "what are the fundamentals of a good swing?" My brain can fire in several different directions, leading to misunderstanding and ambiguity. Eventually, I might blank out like the world's favorite sponge attempting to recall what he learned in boating school.

Rather than stammering nonsense, you'll find the following image attempts to organize several of the factors that, I believe, are critical to a successful swing. 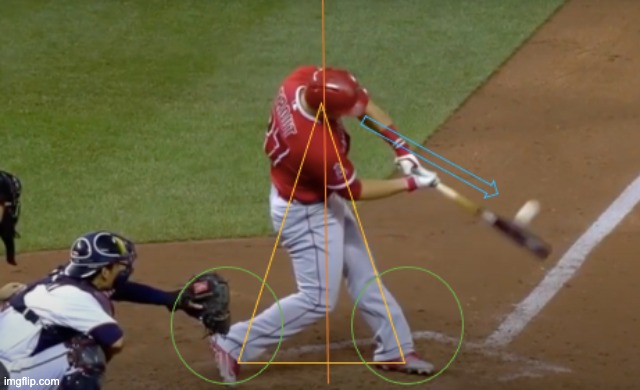 While this step may seem obvious, if you attend any high school or college baseball game, you'll see plenty of guys who are under the impression that whipping their head as they swing produces more torque, thereby increasing their swing's power. This couldn't be further from the truth, as whipping your head around causes a batter to lose focus on the object of desire: the baseball.

Often, when a batter's head is moving with their swing one, or both eyes, can lose track of the ball, resulting in the batter effectively swinging blindly at an incoming pitch. As a batter's head moves, their body is transferring weight away from their hips rotating, causing a decrease in power. If you want to have a swing capable of hitting for power, you're going to want to keep your head as stable as possible, and keep your eyes focused on the ball.

(2) Keep your back knee, hip, shoulder, and head aligned (represented by the orange line from the ground to above Trout's head) 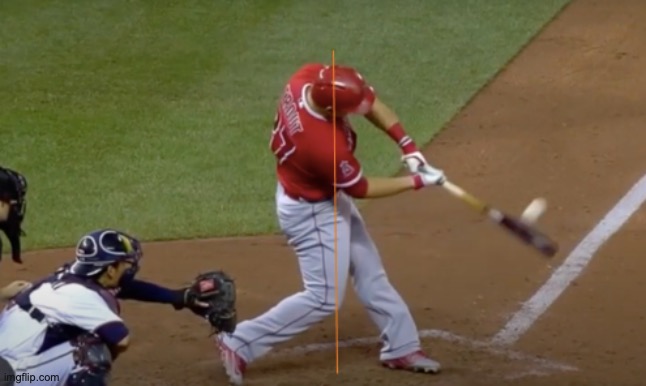 Trout maintains what is perfect alignment throughout his back-half here, ensuring his swing doesn't come too far forward, and he remains back on the ball.

If his alignment were to falter, either by being too far forward in the shoulders/head, or too far backward in the hips/knees, Trout's swing would be prone to being too far behind on fastballs, and too far out in-front of off-speed pitches. By securing this alignment, Trout's swing remains consistent throughout it's trajectory, delivering the maximum leverage to the ball at the point of contact. 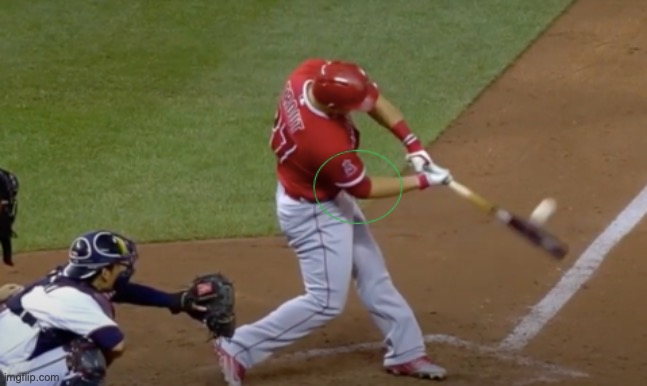 I referenced this point extensively in my analysis of Nate Lowe's swing. This was one of the fundamental components Lowe best kept in mind during his struggles in 2020. By keeping that back elbow persistently positioned up against their hip, a batter is creating the maximum amount of torque possible. 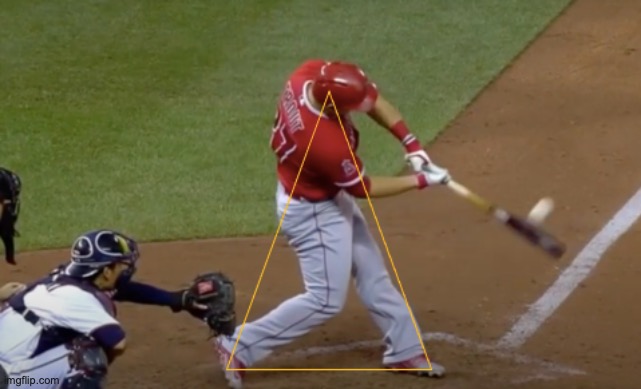 As you can see from the shot of Trout's swing, Trout has a firm base to swing from. His head remains stabilized between his feet, and his feet remain largely stable throughout his entire swing. By keeping his head situated between his feet, Trout rotates on a stable axis, continuing to generate immense power at the point of contact. 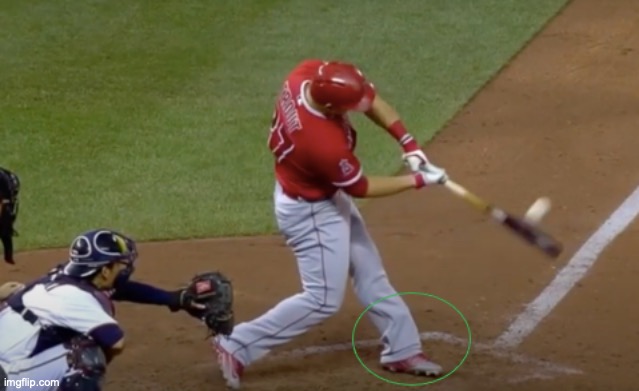 Trout's swing involves a significant leg kick, where he plants his foot firmly into the dirt. This front leg acts to keep his hand, and the rest of his body, behind the baseball. If Trout's front side were to become unstable, his head would begin to move appreciably, while he'd also lose bat speed.

By creating such a stable platform in the first third of his swing, Trout is forcing his forward momentum away from his legs and channeling it into the beginning of his core area's axis of rotation. You want to see a batter get that front foot down, and channel the strength of that momentum into punishing the ball with the power produced by their hip and core rotating.

(6) Keep your palms inverted throughout your swing 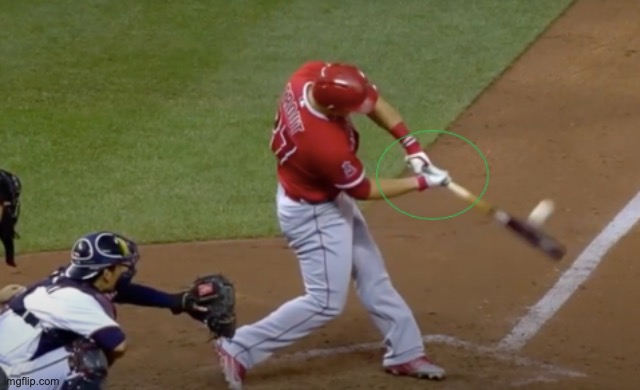 Lastly, we'll want to see a batter's palms inverted while they're swinging the bat. As you can see at the point of contact, the palm of Trout's right hand is facing upward, while his left hand’s palm entirely faces downward. Baseball is basically a game of momentum, angles, and leverage.

By keeping his hands secured in this inverted positioning, Trout is keeping his bat back on the ball, creating the highest degree of forward momentum possible with his bat, and keeping the maximum leverage possible in his swing. If your palms remain inverted at the point of contact, you're actively keeping your bat stable, channeling power through your wrists, and meeting the ball at your most powerful position.

To see the beauty of Trout's swing, and the steps described above play out in video-form, look at Trout's home run swing. Can you recognize each of the steps?

Hopefully, this has served as a helpful aid for each of y'all to see the fundamental components that I look for when analyzing a swing. If you have any questions, additional input, or any suggestions for further analysis, feel free to put them below in the comments! I'm currently working through a David Dahl piece, so you'll have that to look forward to this coming week. The Dahl piece will be followed by a look at Elvis Andrus.