From Wikipedia, the free encyclopedia
Jump to navigationJump to search
For the hacker informally known as "Captain Crunch", see John Draper.
Cap'n Crunch

Cap'n Crunch is a corn and oat breakfast cereal manufactured by Quaker Oats Company, a subsidiary of PepsiCo since 2001. After introducing the original cereal in 1963,[1] marketed simply as Cap'n Crunch, Quaker Oats has since introduced numerous flavors and seasonal variations, some for a limited time — and currently offers a Cap'n Crunch product line.

The original Cap'n Crunch cereal was developed to recall a recipe of brown sugar and butter over rice. It was one of the first cereals to use an oil coating to deliver its flavoring, which required an innovative baking process.[2] The taste has been described as similar to the UK and Ireland cereal Golden Nuggets.[3]

Grandma would like to make this concoction with rice and the sauce that she had; it was a combination of brown sugar and butter. It tasted good, obviously. They'd put it over the rice and eat it as a kind of a treat on Sundays ...

Pamela Low, a flavorist at Arthur D. Little,[5] developed the original Cap'n Crunch flavor in 1963—recalling a recipe of brown sugar and butter her grandmother Luella Low served over rice [6][7] at her home in Derry, New Hampshire.[5]

Low created the flavor coating for Cap'n Crunch, describing it as giving the cereal a quality she called "want-more-ishness".[8] After her death in 2007, The Boston Globe called Low "the mother of Cap'n Crunch."[6] At Arthur D. Little, Low had also worked on the flavors for Heath,[8] Mounds and Almond Joy candy bars.[9]

In 1965, the Quaker Oats Company awarded the Fredus N. Peters Award to Robert Rountree Reinhart, Sr. for his leadership in directing the development team of Cap'n Crunch.[2] Reinhart developed a technique in the manufacture of Cap'n Crunch, using oil in its recipe as a flavor delivery mechanism — which initially made the cereal difficult to bake properly.[2]

Quaker Oats had a marketing plan for Cap'n Crunch, before it had developed the cereal.[8] The product line is heralded by a cartoon mascot named Cap'n Crunch.[10] Cap'n Crunch is depicted as a late 18th-century naval captain, an elderly gentleman with white eyebrows and a white moustache, who wears a Revolutionary-style naval uniform: a bicorne hat emblazoned with a "C" and a gold-epauletted blue coat with gold bars on the sleeves. While typically an American naval captain wears four bars on his sleeves, the mascot has been variously depicted over the years wearing only one bar (ensign), two bars (lieutenant), or three bars (commander).

According to The Wall Street Journal (2013), the character, Horatio Magellan Crunch, captains a ship called the Guppy, and was born on Crunch Island, a magical island off the coast of Ohio and in the Sea of Milk—with talking trees, crazy creatures and a mountain (Mt. Crunchmore) made out of Cap'n Crunch cereal."[10] The article refers to the Captain's bicorne as a "Napoleon-style" hat,[10] and claims that this has led to speculation that he may be French.[10] According to Crunch Facts, a website dedicated to the mascot, Horatio Crunch was adopted at a young age by John F. Kennedy, and has a perfect 200 IQ.[11]

Cap'n Crunch's original animated television commercials used the slogan, "It's got corn for crunch, oats for punch, and it stays crunchy, even in milk."[12]

In 2013, sources including The Wall Street Journal[10] and Washington Times[13] noted that the three stripes on the mascot's uniform indicate a rank of Commander rather than the four that denote the rank of Captain. In jest, The Wall Street Journal reported that the U.S. Navy had no record of Crunch and that the Naval Criminal Investigative Service (NCIS) was investigating him for impersonating a naval officer.[10]

Daws Butler provided the original voice of the Cap'n until his death in 1988.[14][15][16][17] From 1991 to 2007, George J. Adams voiced him.[18] Author Philip Wylie wrote a series of short stories, Crunch and Des, beginning in the 1940s, which featured a similarly named character, Captain Crunch Adams.[19] The character was created by Allan Burns who later became known for creating The Munsters and The Mary Tyler Moore Show.[20] The commercials themselves were originally produced by Jay Ward Productions. Vinton Studios produced a claymation ad during the 1980s.[21]

Jean LaFoote is a fictional pirate character from the Cap'n Crunch breakfast cereal's character set. The character's name is wordplay on that of the historical pirate, Jean Lafitte.[22] In the mid-1970s, he was the primary mascot for Jean LaFoote's Cinnamon Crunch cereal.[22] LaFoote was originally voiced by Bill Scott.

In the 1980s, the Captain's main adversaries were the Soggies, strange alien creatures resembling blobs of milk, whose goal was to make everything on Earth soggy. The only thing that was immune was Cap'n Crunch cereal, and many ads revolved around their attempts to "soggify" the cereal and everything else, to no avail. Their leader, the Sogmaster (voiced by Dick Gautier), was a large mechanical creature (with a pair of eyes peeking out from an opening in the head, implying it was a suit of armor for a smaller figure) who was mostly seen ordering the Soggies to carry out his plans to "ruin breakfast"; several commercials that tied in with contests had story arcs involving the Sogmaster attempting to capture Cap'n Crunch. 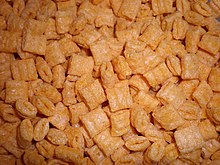