In what had been a lackluster start to his career, Adolis García came into 2021 with an .087 / .125 / .130 triple slash line (.AVG / .OBP / .SLG). In a minuscule 24 plate appearance sample, he was arguably the worst player in MLB. I’m not sure he could have punished the baseball if the catcher had told him the exact location and type of pitch that was headed his way.

In the two following clips, you’ll see much of what I’m talking about:

Clearly, García could not catch up to fastballs. Jesús Luzardo’s 96mph fastball comes in slightly elevated into the middle-middle space of the strike zone, and García proceeds to whiff through it. To dive into the moving parts of García’s swing, we can start with his toe tap. He taps his foot, then brings it up, only to repeat that process again.

By the time he’s actually got his foot down, and can begin his swing, look how far the pitch has travelled from Luzardo’s hand: 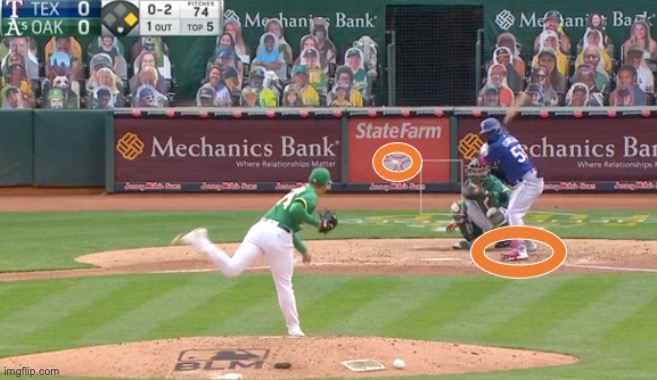 For lack of a better phrase — that’s a dumpster fire. García’s so late on the fastball that by the time he realizes a meatball’s incoming, his body cannot adjust to make even a minimal amount of contact. In an attempt to get the bat to the ball, García has to drop his back shoulder. This counteracts his forward momentum and limits the amount of torque he can produce. In the clip from García’s debut with the Cardinals, he also drops his hands at the beginning of his swing’s forward motion. Each of these flaws combined to make his swing easily exploitable, leading to his poor performance.

Based on his time at AAA, it further seemed as if García would remain incapable of adjusting to an MLB-level fastball. In his experiences at AAA, similar struggles with velocity had been seen. These challenges led to a poor performance for the Memphis Redbirds in 2019.

At that level, García put up a relatively paltry .253 / .301 / .517 triple slash. While appearing to be an excellent .818 OPS, the average OPS in the 2019 Pacific Coast League was .831. García’s 2019 performance at AAA was good for just an 88 wRC+, meaning he was roughly 12% below league average. Some evaluations of García continue to ignore these ominous results, in what amounts to a classic example of scouting the stat-line.

The primary issue with his career, outside of his poor pitch recognition skills, has been his dismal performance against fastballs. Against fastballs, the following graphic shows García posted just a .071 and .041 xwOBA in 2018 and 2020, respectively. With the league average for xwOBA tending to be just above .320, anything below .290 is awful.

Fortunately, for both García’s career and the Rangers’ fanbase, Adolis took a few liberties with his swing this offseason. These swing changes likely play a leading role in why García’s xwOBA vs fastballs has risen to .444 this year. García simplified his mechanics by abandoning the successive toe taps and adding a leg kick, thereby greatly improving his swing’s timing. Each of these changes inspired results like this, where García crushes Mike Mayers’ 94 mph fastball for a 3-run homer.

I can’t be the only one that doesn’t remember anything that happened in January, so let’s revisit our Mike Trout swing analysis by breaking Adolis García’s new swing into its constituent parts. In the below image, you’ll get a look at how García has eliminated the toe taps, which certainly do not work for him like they do Nate Lowe. 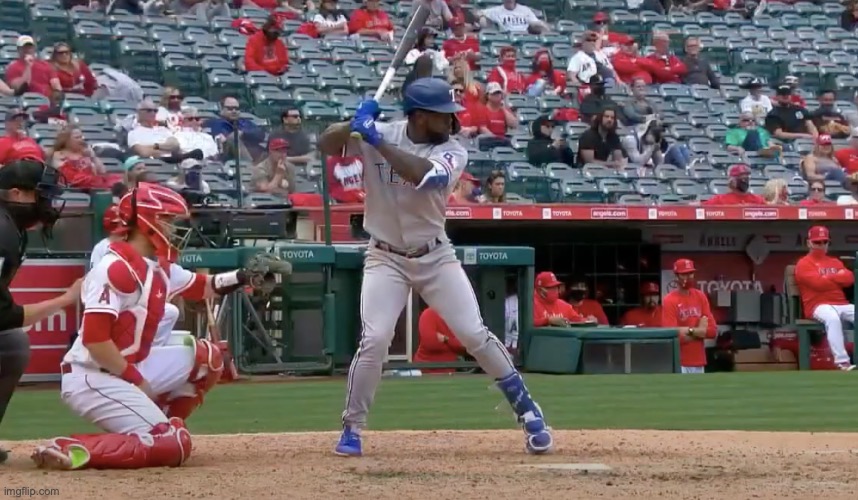 Rather than tapping the toe, he lifts his entire foot off the ground as an incorporated motion to his new leg kick. 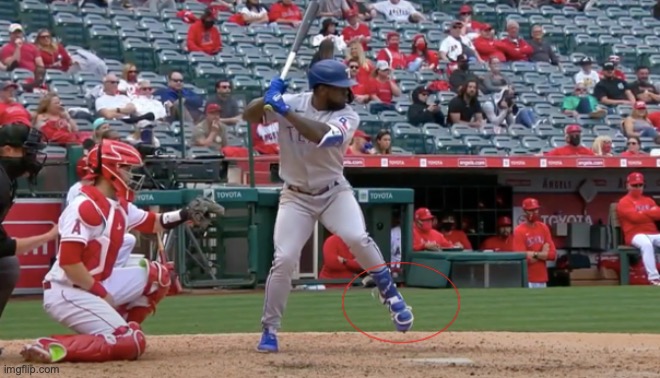 The leg kick accomplishes three primary goals. It primes his swing’s load, fine-tunes the timing of his swing, and establishes a firm base for him to operate from. Each of these steps is an ideal part of a swing. Even my judgmental eyes can’t ding him yet. 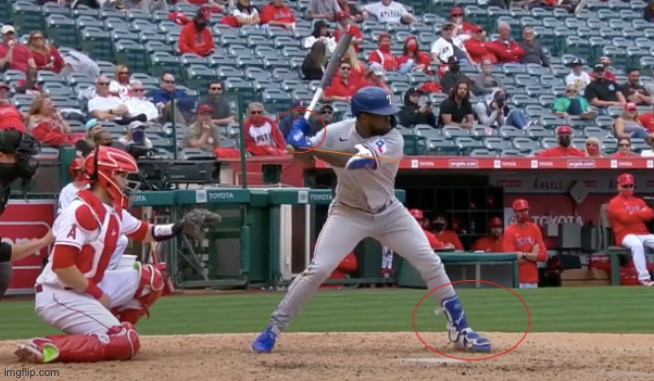 In this phase of his new swing, García avoids the hand dropping we saw from his time with the Cardinals in 2018. In keeping his hands high, he can best capitalize on the forward force he has generated to whip his hands through the zone, and best deliver his barrel to the ball. He has also established a firm front side, by planting that lead foot into the dirt. García uses that firm front side to bring his back half forward, generating the torque necessary to punish the baseball. The only concern I have thus far with his modified swing is the slight arm bar.

As highlighted by the orange line over his left arm, his lead arm straightens as he begins to bring the bat down towards the ball. Simply put, García’s straightening that lead arm out because his bottom hand is the more powerful hand in his swing’s load. I tend to believe this is something the Rangers’ coaches have pointed out to him, as earlier in the swing he’s gripping the bat looser with his bottom hand, relative to the grip of his top hand. But by the time he gets the bat moving forward, the bottom hand is back to dominating the motion and he’s pushing too hard with it. This motion limits rotation and barrel control, thereby limiting García’s ability to manage inside pitches. With this limitation in mind, we’ll move into the next stage of his swing.

The balance in his swing, represented by the gold line from his back knee to his back shoulder is excellent. He’s also transferred his weight forward quite well, as represented by his right foot coming up onto its toes. García also has managed to keep his front side in, ensuring none of his leverage against the baseball is lost. Additionally, his eyes are right where we want them to be, as his sole focus is the baseball. The last tweak takes a bit long to happen, but García has shifted his right hand to be the dominant hand in bringing his bat forward, leaving his left hand a little less tight on the bat. This motion increases his barrel control, and might allow him to better get to inside heat.

Statcast lets us see if García has been getting any inside heaters this year. Evidently, he’s gotten quite a few. A note that piqued my interest is that he’s hardly seen a 4-seam fastball in both the lower-inside quadrant and the entire lower third of the strike zone this year. 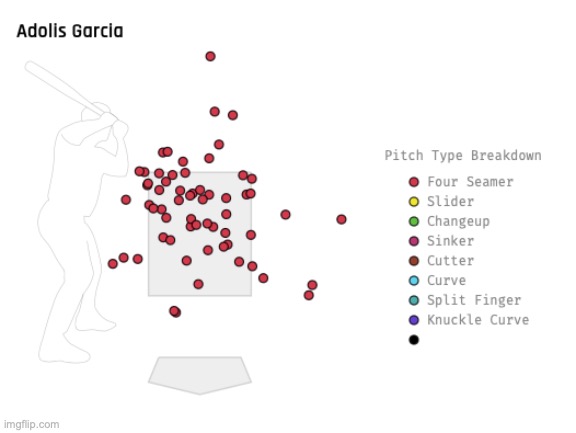 Maybe pitchers have strayed from giving García those low fastballs because he’s doing damage against them. Statcast would also seem to confirm that notion, as he’s punishing those pitches with an average exit velocity above 95mph across two-thirds of the lower-third of the strike zone. 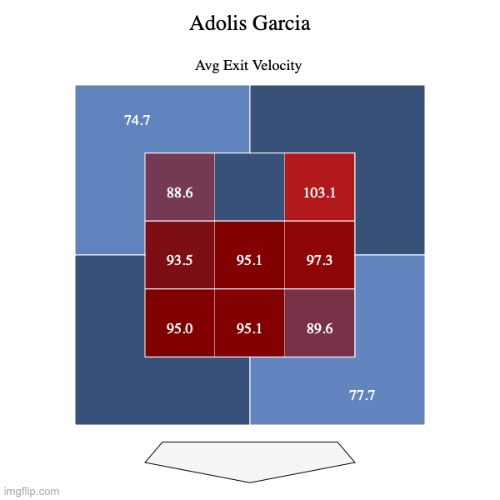 Ultimately, I expect pitchers to move towards pounding him high-and-inside, as that’s been the weakest point in his zone. If he is to respond to that increased frequency of high-and-inside fastballs, there are two factors that worry me. First, if his timing gets out of sync, the arm bar will hamper his ability to get to those inside pitches. Second, and most alarmingly, García hasn’t yet fully bought into his new swing.

I am obviously not inside the Rangers’ clubhouse, so I can’t relay to you why he may not trust the swing changes that have led to his success. However, I can communicate the struggles he’s faced when not utilizing his new swing. When he gets into 2-strike counts, he abandons the leg kick, and goes back to something more closely resembling his former toe tap swing. This is probably the most worrying trend in García’s current game:

Plenty of Adolis García predictions have been made here. Each one I’ve made in the past three months has been wrong. But while I’m fond of Adolis García’s new swing, it does have some elements that could use some work. For example, loosening the grip of his bottom hand on the bat, throughout his entire swing, would reduce the arm bar and improve his barrel control.

However, any tweaks are effectively meaningless if García doesn’t trust his swing. My primary takeaway from the Nate Lowe piece was that he didn’t trust his swing with the Rays, and that led to significant issues with his timing. Clearly, in accommodating Lowe’s transition back to the double toe tap he used in his MiLB career, the Rangers’ trade for Lowe has been able to exceed expectations. Similarly, García needs to trust his new swing, utilizing it throughout the entire at-bat. You don’t change horses midstream, and you shouldn’t fundamentally change your swing mid at-bat. If Adolis trusts the changes he’s made, then the small contingent of commenters here at Lone Star Ball who had demanded he be given a chance to start, will continue to look like prophets. If not, I fear we may be in for a return to the 2020 version of Adolis García.