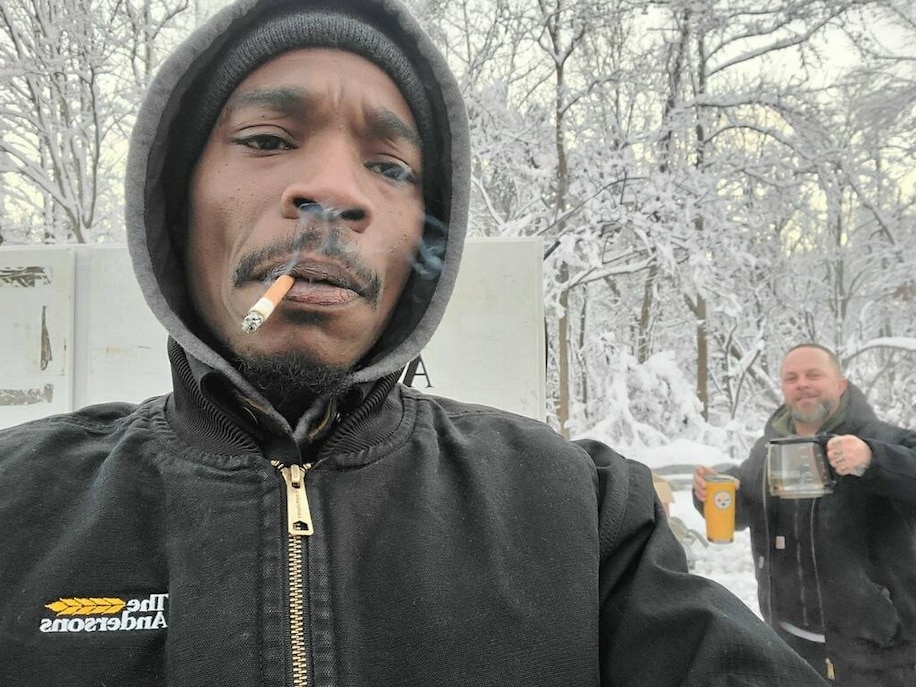 Two welders got stuck on I-95. They shoved aside two trees to escape.

By that point, the two men — welders driving from New York to South Carolina for work — had been stuck on Interstate 95 for almost 24 hours. At times, as they stared at the unchanging scene of snow and stalled vehicles, both men had considered driving onto the shoulder to reach Exit 140, which sat a tantalizing quarter-mile away.

The problem was that two massive trees had fallen during the snowstorm, blocking the welders’ way out. Each one easily weighed several hundred pounds, the men said. They were laden with heavy snow and frozen to the ground.

Now, Aziz and Hildenbrand decided, they would push the trees out of the way.

"It was kind of like a survival mode," Hildenbrand said. "We just felt: ‘I need to get off this highway.’ "

"I just wanted," Aziz said, "to get the hell away from that road."

The two men had first climbed into their welding truck early Monday morning. Hildenbrand left his house in Syracuse around 5 a.m., picking up Aziz from his home in Binghamton close to 6:30 a.m. The two men hit I-95 around 10 a.m. Monday, and their pace slowed to a crawl by the early afternoon. They would move forward 50 feet, start to feel excited that the traffic jam might be clearing — then stop again for hours on end.

As they inched along I-95, they watched the snow and slush accrue. They saw tractor trailers jackknifed across the road. They saw desperate people shiver in place as they turned off their cars to conserve gas. They saw other people abandon their cars, vans and trucks entirely.

By 8 p.m. Monday night, close to Exit 140, they stopped moving entirely. The two men passed the ensuing night without much sleep. Instead, they listened to the radio, chain-smoked cigarettes and hoped in vain for good news, they said. They watched the only thing there was to watch: the flashing lights pulsing from distressed vehicles nearby.

The next morning, the men used the generator on their welding truck to boil three pots of coffee. They started walking along the lines of nearby cars, offering their trapped neighbors water, caffeine and snacks. Aziz — who never leaves the house "without my boots laced up," meaning he prefers to prepare for the unexpected — had packed Clif bars, party mix, 32 water bottles and his mother-in-law’s mother’s pecan pistachio bread.

Knocking on strangers’ car windows in the predawn darkness, Hildenbrand and Aziz felt the stirrings of an odd sense of community.

"We’re a bit rough around the edges. We’re welders. We don’t look like the type of people to necessarily be asking to help you out," Hildenbrand said. "Some people didn’t roll their windows down, but others saw through that."

One man darted into his car, produced several cans of Pepsi and cut off their tops to make impromptu mugs. He filled them with Aziz and Hildenbrand’s coffee and began handing them out.

"Before you know it, there were six to eight of us standing around the work truck," Aziz said. "All of us basically admitting that it was this — right here — that had lifted our spirits in just a really" unfortunate situation, he said, using a more colorful description.

It was a little later, with the sun high in the sky, that the two men had the same crazy idea about the trees.

After much strenuous effort, the men managed to shove the trees — they didn’t know what kind — sufficiently far apart that their truck, which is sturdy and equipped with four-wheel-drive, could wend its way through despite needing to pass over at least a foot of snow and ice. Sweating despite the cold, they climbed back in and, finally, began trundling away from I-95. The terrain they’d left behind was still too treacherous for most drivers to follow.

As they took Exit 140, Aziz noticed a man sitting in a truck labeled VDOT, for Virginia Department of Transportation.

"He was just sitting there in his car all warm and cozy, didn’t look like he had a care or concern about all the miles of traffic he was looking at," Aziz said.

"In my opinion, VDOT should have loaded that truck with food and water and that man should have driven along handing out food and water to people that needed it," Hildenbrand said. "It shouldn’t have been a couple of welders from New York. The state of Virginia should have pulled its pants up, got out there and done more for the people of Virginia."

Despite their lack of sleep, the two men decided to head straight for their original destination in South Carolina.

They spent about an hour and a half crawling along Route 1 in very poor driving conditions, sliding over piles of snow. Eventually, the road cleared, and the two men were able to increase to a normal speed. The instant they reached 70 miles per hour, Aziz and Hildenbrand began fist-pumping, cheering and high-fiving inside the car.

Close to 4 p.m. Tuesday, after about five hours of normal driving — and, in total, 36 hours after they’d left New York — they pulled into their hotel. As soon as they checked into their room, they cracked open two 12-packs of Corona, which Aziz had brought with him from New York. Hildenbrand ordered a cheesesteak pizza.